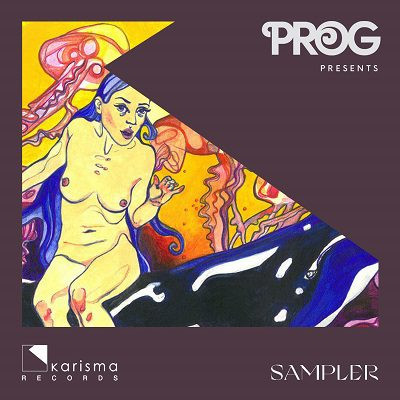 Since getting the ball rolling on the label samplers which was in issue 126 starting off with MoonJune Records, it’s a quite treat for PROG Magazine to go beyond various landscapes to get us on their flying machine and discover more adventures beyond the land of grey and pink. Now some of the subscribers will prefer the CD or downloading the label samplers on Bandcamp.

It will become a dividing line in the sand for them whether they prefer downloading or not. Which I don’t want to make a big hassle over. So let’s head towards the Norwegian islands as we go into the world of Karisma Records. Founded by Robin Mortensen nearly 20 years ago, the label works around through rock and progressive music, but according to their website, their main focus is simply quality music for musically mind people.

Now I have a bit of a soft spot when it comes to the label from bands and artists like; Oak, Wobbler, Tusmørke, and Arabs in Aspic, but when Prog Magazine did a sampler compilation of the label from issue 128, it made me open my eyes a bit more to see what I was missing throughout the landscapes by embarking on a handful of highlights that will make you want to find out more about Karisma.

From the full sonic-spaced out hard rocking voyages of Shaman Elephant’s ‘Magnets’, the folky reflection of loss with some Moody Blues-sque atmospheres as Mimmi Tamba lending Bjørn Riis a helping hand to reconcile before it’s too late to fix their relationship on ‘Everything to Everyone’, and Jordsjø going into the Silence label honouring Bo Hansson’s Lord of the Rings-era meets Sweden’s female folk-hero Turid as she serves tea between him and Rush’s A Farewell to Kings whilst Rick Wakeman handles the production levels on ‘Skumring i Karesuando (Dusk in Karesuando)’.

Then we make the jump to light speed for a proto-punk attitude for a nod to CAN’s Monster Movie-era channeling ‘Father Cannot Yell’ on Kosmodome’s light-speed adventure on ‘Hypersonic’ before Mellotron’s erupt out of the volcano with a monstrous roar channeling BigElf and Purson thanks to the time changing textures of the Danse Macabre from Seven Impale’s ‘Serpentstone’. You gotta admit, Mortensen knows how to find the bands and artists by giving them carte blanche and lets them go as far as they can go by pushing the envelope even harder.

But it’s Wobbler that takes us on a visionary storybook as they prepare their own roller-coaster ride by going into massive circles channeling the Italian prog sounds and arena rock maestros Starcastle between ‘Five Rooms’ thanks to the carousel organ midsections and flying wings momentum that Gentle Giant gave them to fly towards the heavens on ‘Lá Bealtaine’.

Oak’s gentle soul-searching ballad ‘We, The Drowned’ is a spiritual beauty that still holds up four years later while MEER’s ‘Songs of Us’ becomes a catchy, uplifting composition that’ll make you want to sing-along to the lyrical structures from the octet group that bring thrilling rhythm guitars, swirling keyboards, and harmonising vocals to fill our hearts with love.

But it’s Brazil’s own Carvala Escalate’s title-track with bass-driven vibes by taking us into a deep-diving oceanic adventure of a mysterious city that is filled with questions and answers from the nods between Premiata Forneria Marconi and obscure prog legends, Gracious. And finally Arabs in Aspic’s ‘Mørket’ is a hands-down nod to the ‘60s garage and hard rock textures that’ll make you want to dig out the 5-CD box set of the original nuggets and some of your early Sabbath albums like crazy and continuing where The Beatles ‘I Want You (She’s So Heavy)’ had left off.

This here was quite an adventure that I embarked on in the next adventure of the Prog Magazine sampler covering this amazing label. I hope one day to find out more to see what I was missing in the years to come throughout the roaring ‘20s. To me, it’s more than just the names I mentioned, but wow! Karisma Records uses the prog-rock cookbook very well to bring us delicious dinners that is worth our appetite.