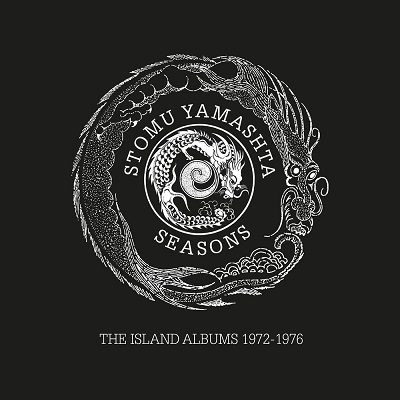 This 7-CD set consists of percussionist Stomu Yamashta’s time with Island Records where he released seven albums from the label from 1972 to 1976. These reissues were issued back on the Esoteric label in 2008 with Jon Wright’s liner notes. Now in a box set containing Stomu’s time on Blackwell’s label, it showcases one of the true composer’s to bring the sounds of classical, jazz, Asian music, avant-garde, and progressive rock in all of its glory.

The set contains Floating Music, The Man from the East, Freedom is Frightening, One By One, Raindog, Go, and the live recording Go…Live from Paris. By now, some of you may be familiar with Stomu’s music being used in the 1976 sci-fi cult classic, The Man Who Fell to Earth starring David Bowie, Rip Torn, Buck Henry, Candy Clark and directed by Nicolas Roeg (Performance, Walkabout). When you listen to Stomu’s music, it is like a visual painting come to life with beauty, surrealism, and unexpected worlds that are mind-blowing.

And to be allowed to have people like guitarists Gary Boyle and Al Di Meola, keyboardist Brian Gascoigne (who would later receive screen credit and synthesised electronic sounds on Jim Henson’s The Dark Crystal, and then following it up with Labyrinth for the score-only tracks), synthesiser maestro Klaus Schulze, Traffic and CAN bassist Rosko Gee, and of course vocalists Murray Head and Steve Winwood, they all lend Stomu a helping hand to bring his music to life.

From the eerie vibraphone, bass walk, and Thompson’s crazy keyboard sections on ‘Poker Dice’, it sets up this walk into the pawn shop, knowing that Newton has landed on Earth and seeing the world isn’t what it used to be in all of what is to come for him. You can hear aspects between Traffic, Gentle Giant, and Soft Machine’s Third-era rolled into one for the first six minutes before the ‘Malaguena’-sque vibes reach temperature levels up and running.

On ‘Freedom is Frightening’ and ‘Memory of Hiroshima’, he channels the early essences of Pink Floyd’s underground years to bring a sense of danger, clock-ticking vibrance, and ghostly vocalisations setting up the danger on what is to come. Both Brian and Gary bring in the flames between organ and guitar before Hugh’s wah-wah bass with electronic fuzzes by lighting the fuse.

It becomes a free-for-all that is right in your face. The classical textures for the sixth track on CD 2, becomes a remembrance on what happened on that fateful day between the two cities of Hiroshima and Nagasaki on August 6th and 9th, 1945. It hits home for Stomu as he brings in the fire for both Morris and Gary to add that pre-WYWH environment to keep the clock-ticking with horn fanfares setting the alarm to go off at any second.

Murray brings in the organ-driven bass blues into a fast-driven action packed sequence on ‘Rainsong’. Hisako and Daito bring in the thunder in Head’s vocal styles in the midsection as they channel the unsung heroes East of Eden’s ‘Northern Hemisphere’ into the song with blistering guitar work that goes down the line like crazy!

‘Black Flame’ becomes a deadly, gruesome scenery that resembles the score to Alejandro Jodorowsky’s surreal 1970 midnight western, El Topo. The post-apocalyptic nightmare is terrifying, deadly, disturbing, and the epic beauty between strings and horn, gives us an insight on what is to come as he channels his collaborator, the late great Peter Maxwell Davies from the score sessions he did on Ken Russell’s controversial 1971 gem, The Devils.

But he returns back to his home in the land of the rising sun between the traditional Kabuki dance with fiery unexpected twists and red-hot turns during their performances at the Carre’ Thorigny Theatre on ‘What a Way to Live in Modern Times’ and the call to the gods between Goro’s vocal lines resembling Damo Suzuki’s time with CAN and Hiskao’s violin work with the spiritual traditions of the ‘Mandala’.

Then, everything becomes this chaotic nightmare waiting to happen with Stomu and Morris going into this intensive percussion workout in the climatic sections on ‘One Way’ then returning back to the Canterbury route with ‘Xingu’ thanks to some incredible bass lines and keyboard routine resembling the styles of Hatfield and the North, Matching Mole, and Egg.

The collaboration from the Go years that he did with Klaus Schulze, was a match made in heaven CDs six and seven. You can tell that these two have a lot in common to bring in the light and darkness together by bringing his time with Island Records to an end.

From the spacey turned rain-pouring soul with Winwood driving off into the night by ‘Crossing the Line’ in this futuristic parallel universe by returning to the Shoot-Out at the Fantasy Factory sessions, knowing that Steve hadn’t forgotten his Traffic days by revealing the ‘Man of Leo’ with a gospel-church twist. The live version of ‘Ghost Machine’ with Di Meola’s killer guitar sections, gives Yes’ ‘Heart of the Sunrise’ a big run for the money.

But just as everything for the final curtain call, Klaus brings more of the thunder for a mournful farewell as Stomu gives a prologue on the piano for ‘Stellar’, and Klaus the last rite for the thunders to clash inside the arena in Paris for the ‘Space Requiem’. What a ride this box set really is. Esoteric really knocked it out of the ball park on this one.

I’ve always was keen to delve into Stomu’s music, but just wasn’t ready for it at the time during the late 2000s and into the early 2010’s. Now in 2022, I adore every minute of this box set. With thanks to Roeg’s sci-fi classic, Stomu Yamashta deserves a lot of recognition he deserves from all of the hard work he has done. So if you admire the early Floyd, krautrock, the Canterbury scene, and classical music, then Stomu Yamashta’s Seasons is the one to check out.