(((O))) Feature: Echoes of the Past: Unreal City – Frammenti Notturni 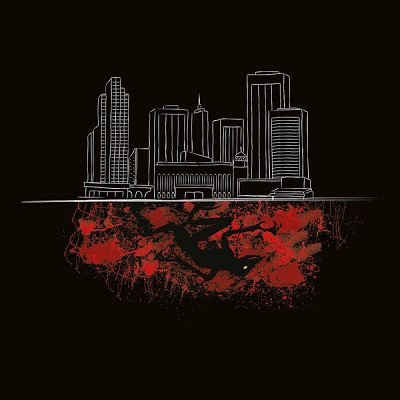 When it comes to the Italian progressive rock scene, you know something magical is about to happen. Whether it’s the striking album covers, Italian-sung gems, unexpected time changes, stories based on Darwin, two different planets, composers, or the themes of the Supermen, you know it’ll perk your ears to find out that the progressive genre goes beyond the UK, but with a band like Unreal City, they carry that flag since 2008 by keeping those flames burning red hot in the city of Parma.

They released their third studio release five years ago on the AMS label entitled. Frammenti Notturni (Night Families). Here, Unreal City go into another return of themes detailing on how the human race communicate with others. Alongside the members between vocalist and keyboardist Emanuel Tarasconi, guitarist Francesca Zanetta, and bassist Dario Pessina, the drums were taken over by Marco Garbin who filled in for Frederico Bedostri.

And to be allowed to have violinist Matteo Bertani and vocalist Camilla Pozzi lending Unreal City a helping hand, they let listeners know they still have magnificent powers inside their hearts. From the frenzy swirling attack introduction of ‘La grande festa in Maschera’, Emanuel and Matteo take each other’s turns by going from one corner into another before Francesca continues the reprising sections of ‘Caligari’ from 2015’s Il Paese del Tramonto where it left off before the pouring effects of some cooling piano rain to give Emanuel a chance to set on where we are right now in the pre-COVID era during that time frame.

You feel a sense of loss, being trapped in, and not knowing when the time is right to be back in the outside world. Bertani sets up the scenario of being inside the prison and having cabin fever momentum before going into this heavier vibrations of Gilmour’s textures that Zanetta channels in the song. But it’s Camilla giving a glimpse for a ray of light to come forth before Dario lays down some of the funky-bass lines for more rain to come in during the following weekend.

‘Le luci delle case (Spente)’ brings to mind the essence of early Pink Floyd serving tea for French and Italian prog maestros; Le Orme and Atoll. Matteo sets up this post-bloody aftermath of the war on his violin before Emanuel and Francesca go in for the attack with Garbin leading the charge whilst Pessina channels some of the Herbie Hancock styles from Headhunters.

You can tell it’s quite a challenge for Unreal City to go from Floyd’s opened door to Hancock’s territory as they channel the styles between ‘Chameleon’ and ‘Watermelon Man’ with some unexpected tidal waving changes as Matteo lays down some of the alarming sequences to give the rhythm section a chance to come in at the right moment. ‘Barricate’ places you in our solar system with a groovy psychedelia Leslie guitar structure, taking us to the light by reaching the promise land.

I felt a little tug to MoonJune band D.F.A. that comes to mind as the band pay homage to the Italian Fusion group and to label founder Leonardo Pavkovic, Unreal City gives him a tip-of-the-hat nod of opening the doors to not only just the prog genre, but jazz, avant-garde, and world music on his label.

But it’s the mysterious ‘Il Nido delle Succubi’ that just grabs your heart like crazy as Emanuel brings all of the ammunition to his keyboards by going into this full-scale attack with Zanetta on her side creating this Morse Code effect on her instrument before they float into the golden-era of the swirling Vertigo label channeling two bands; Gracious and Cressida with Panna Fredda handling the production sessions.

Just as they walk into the surroundings of Phideaux’s Snowtorch-era, they know that the battle has only just begun once more with militant drum volumes, spooky moog-like effects, and the spoken dialog from Alfred Hitchcock’s unsung gem from 1948, Rope starring James Stewart. Not only Jimmy gives an electrifying performance, his spirit is telling the band to march into those fields as raise some hell like there’s no tomorrow.

The sombering closing track ‘Arrivi all’alba’ gives a sense of closure on what has happened. You can feel the soldier’s blood draining from the faces, filled with emotion and questioning themselves over what just happen. Unreal City sets up the P.T.S.D (Post-Traumatic Stress Disorder) atmosphere that these fellow comrades will never be the same after they return to their loved ones.

Unreal City has done it again. And while they’re working on a new album with Francesca returning back to the band in 2020 after finishing up with Quel Che Disse il Tuono’s 2020 gem, il Velo Dei Riflessi, the band’s third album is a gem of a kind of what they were doing in the lion’s den and returning with another holy grail from AMS Records.