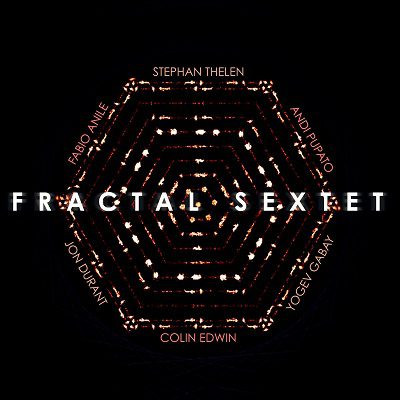 When you have a music project that comes at you like a massive volcanic eruption in the middle of nowhere, you know that something amazing is about to happen. For Fractal Sextet’s sole self-titled debut on the Alchemy label, it is one hell of a release that is like a caged animal ready to be unleashed and go on a cannibalistic blood-thirsty prime in the year of our lord, 2022.

From guitarists Jon Durant and Sonar’s Stephan Thelen, former Porcupine Tree bassist Colin Edwin, former Nik Bärtsch’s Ronin percussionist Andi Pupato, keyboardist Fabio Anile, and drummer Yogev Gabay, it is a perfect combination like no other. It is so perfect, they created their own Frankenstein with massive amounts of electricity to bring their monster to life.

Listening to the album is like a self-meditated guide through the arctic landscapes with perpetual darkness that the sextet goes through. When you hear the clock-ticking drum patterns that Gabay does on ‘Fractal 5.7’, you get a sense of being caught in the middle of a heavy snowstorm with bell-chiming sounds, ambient arrangements from Fabio, and rising consistency between Durant and Thelen.

But it goes into the hottest section of the rainforest from Edwin’s bass as Pupato follows Colin in hot pursuit by transforming himself into a wolverine whose high on angel dust as he looks through a ‘Zetoscope’. It has this mid-fast pace that Gabay and Fabio do by creating these mystic piano arrangements before entering into the territories of the Fripp castle that’ll grab your heart, nonstop.

Most of the time I can hear aspects of The Division Bell sessions, mixed in with a young Paul Thompson of Roxy Music, creating those intensive heat vibes he used on ‘2HB’, but going for that futuristic sweat that awaits him. For Yogev and Andi, they work well together by turning into a band of brothers.
Just listen to the last section of ‘Planet Nine’ for example. They really duke it out in the boxing ring as if they were Muhammad Ali and George Foreman for one final match in Zimbabwe.

After they finish their improvisational exercise, it gives the other members a return to form from their little break and hurling back to the cosmos once more with howling frets, burning like crazy! It’s like a continuation of where the title-track from CAN’s Future Days had left off, but making the fires burn more and more.

‘Slow Over Fast’ sees Fabio trading in some Gentle Giant motif’s from the Free Hand and Acquiring the Taste sessions, paying homage to Kerry Minnear. As Fractal Sextet make the journey home with Thelen and Durant trading with each other’s workout, they make one more pit-stop to the minimalistic planet of ‘Mise En Abyme’ that is filled with eerie twilight zone backgrounds and a crying to the gods momentum.

Traversing supernatural universes and investigating more specimens coming to life, Fractal Sextet have returned home to its listeners by bringing in this massive flaming tree that is out of this world.