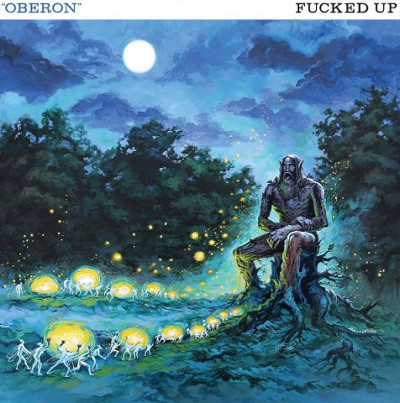 Oberon by Fucked Up

Taking the name from the king of fairies, as depicted in A Midsummer Night’s Dream, Oberon is the latest release from Toronto hardcore punk rockers Fucked Up. Since 2001 the band have been steadily releasing music that veers from mud to majesty and often within the same song. There’s nothing they won’t try in terms of messing with convention, who can top the series of releases themed on the Chinese celebration of having each year named after an animal? They had the idea of releasing a slowed down version of their sublime Glass Boys album, making it even better. Oh yes, and along the way they picked up a major Canadian award for their classic David Comes To Life opus.

As a fan of many years, I’ve come to appreciate there are no bounds with what Fucked Up will try, but with this extended play, I’m finally pushed to the limit of acceptance. I think that might be the intent though, as I’ve said, this collective does like to mess with convention and don’t like sitting on their laurels. The process of recording until mastering spans between November 2020 and September 2021, yet it’s only now Oberon sees the light of day. Probably pressing plant issues as the vinyl will be released with three colours in limited edition.

Opening track ‘Oberon’ is a grinding dirge of sludge riffs mixed with a hint of Disney influenced horns, like the kind of soundtrack that would accompany a ghostly shadow creeping up a wall. Damian growls with an unusually excessive amount of phlegm, even by his standards. By the song’s finale the guitars are travelling through more melodic pastures but it’s still unsettling. Quite possibly one of the most challenging tracks the band have released.

The striding ‘Strix’ jumps straight into a choppy twisting set of pummelling riffs while eery guitars streak colourful hues across a blackened sky. This is more familiar territory, but the track has a precarious edge to it with the driving riff creating a malevolence and menace. ‘Mashhit’ snakes along with an electro-bass vibe reminiscent of that time ZZ Top embraced modern technology. Clearly that’s where that comparison ends, as Fucked Up have two modes. One is combining beautiful searing melodies with Damian’s enraged poke-the-hibernating-bear growls, the other combining nasty metal/punk riffs with Damian’s enraged poke-the-hibernating-bear growls. This song opts for the latter and ends in a wired blend of screeching guitars and a hefty propulsive electro groove.

For the closing track, we have the bizarre ‘The Aquarium’ which is apparently a cover version of a track by Saint-Saens. The Disney effects return with a clattering string section where you can imagine one of those massive weights drop through the sky, before crushing the unsuspecting Wile E Coyote into the earth. This finally segues into a serene section of blissed out strings and synths that inexplicably ends just as you finally feel relaxed.

The PR for this extended play actually describes the release as “Four tracks of pure audio excretion” and this reinforced my previous thought that the band are actively trying to fuck with us. I get the hunch that they felt the urge to play this set of cards, as recent activity found them release the double album oddity that was Dose Your Dreams followed by the exhaustive Year of the Horse album, which had just way too much going musically and conceptually, to successfully grasp. The recent tour found the band relive the glories of David Comes To Life in its entirety. I’m kind of thinking Fucked Up have opted to throw caution to the wind with Oberon. I might just let this one fly away.