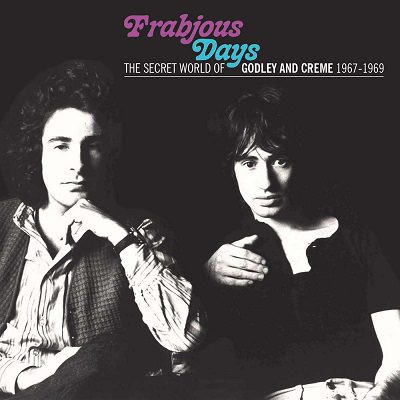 When I look back in my time of playing and listening music, I always get a sense of what my ears will take notice of as I put my earphones on. Because it takes me to various spaces whilst the visual imageries are coming to life in front of my eyes. Whether it’s Pink Floyd’s Dark Side of the Moon, John Coltrane’s A Love Supreme, The Beatles Revolver, or Steven Wilson’s To The Bone, music follows you wherever you go.

I would sometimes whenever I go for my walks, have my iPod touch ready to see which album that will put me in the mood for a nice morning or afternoon stretch across the block, walking to the church, or looking around at a Thrift Store, the sound and vision is there for me. Frabjous Days, released from the Grapefruit label, is the early genesis of Godley and Creme’s recording sessions they did from 1967 to 1969 by the time they were signed to Giorgio Gomelsky’s short-lived indie label, Marmalade Records.

Gomelsky signed Kevin Godley and Lol Creme who were both Manchester art students at the time, were renamed as Frabjoy and Runcible Spoon to his label because he wanted them to be the next answer to Simon & Garfunkel in pre-1969. Taken its name from Lewis Carroll’s Jabberwocky and Edward Lear’s The Owl and the Pussycat, the songs were already recorded to give the duo their first debut release for the label.

Unfortunately, it never happened after Giorgio had trouble with finances, fund any bookings, and was losing money very slowly before the label was dusted in November, 1969. Now in 2022, the songs have finally come to life.

This here is the missing key for what was to come between Hotlegs, 10cc, and Godley and Creme. And it’s a real unearthed gem that is out of this world. Listening to these tracks, you can just close your eyes, being at the studio sessions, and watching in awe of the duo creating one song after another that’ll make you want to dig out your old scrapbook by revisiting the memories you had as a child.

The epic country-folk turned into the final sections of a pre-Yes on ‘Starship Trooper’, ‘Take Me Back’, which would be revisited from the Hotlegs years, shows some of the beginnings of these sonic-soaring structures to go beyond the passages of time between the arrangements of Peter Banks and Steve Howe’s guitar textures. Then, it’s out into the garage-psychedelia attitudes of The Yardbirds’ ‘Happenings Ten Years Time Ago’ by viewing the scorching ‘Hot Sun.’

There are two different versions of ‘I’m Beside Myself’. One is the album version, the other is the single version. It was hard for me to pick which of the two were better. But for me, it is probably the single version. You have a down-home drive into the environment with some good ol’ harmonica sounds, hat-tipping vibes to the Nashville sound, and foot-stomping bass lines that’ll make you feel accommodated.

‘The Late Mr. Late’ performed by Graham Gouldman, goes into this turkey-in-the-straw twist before delving into the watery midsection dream-like sounds of rhythm guitars, organ, and flute orientation’s. And then were off to the beaches in Brighton with a Monk-sque west-coast vibe of ‘It’s The Best Seaside in the World’ and mellowing folk-like childhoods of the Bee Gees in ‘Chaplin House’.

Then it becomes a spiritual raga atmosphere with sitars and perfumes inside the rosemary garden to bring it all then and there for the ‘Animal Song’. The bonus tracks are worth exploring for more hidden treasures for the duo. There’s the joyful jazz psych dance by The Yellow Bellow Boom Room of ‘Seeing Things Green’, the acoustic waltz nod to Dave Mason’s lyrical textures of early Traffic on ‘Easy Life’, and the pounding rockers that’ll hit the dance floors at the nightclubs anthem of ‘Hello Blinkers’ and the bossa-nova closer, ‘Goodnight Blinkers’.

The 6,000 word essay was done by David Wells, founder of Grapefruit who did an interview with Godley about the history of Frabjous and Runcible Spoon, rare photos of Godley’s bands he was in from The Sabres, to his Dad’s electrical store in Shudehill, promos of new single releases from CBS records, Kevin and Lol’s pan book designs, and an invitation to Blinkers Club.

You gotta love the design artwork that radio DJ Andy Morten of Toffee Sunday Smash has done for Pepperbox to give the Frabjous years, the proper recognition it deserves. Yes it’s different, yes it was ahead of its time, but the circle is finally in full to give their folky-psychedelic period, the warm handshake it deserves for Godley and Creme.