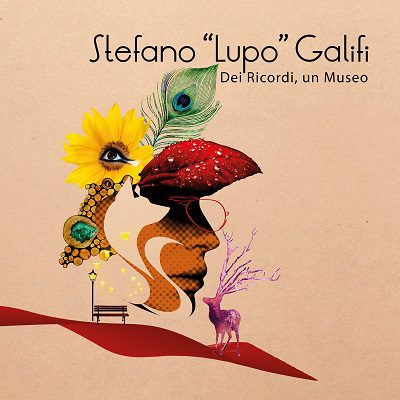 Stefano “Lupo” Galifi has made a name for himself at the height of the Italian progressive rock movement as one of the lead singers of Museo Rosenbach who released their only debut in 1973, Zarathustra on the Ricordi label in April of that year. It’s considered not only a controversial masterpiece, but among a crown jewel of the band’s legacy that didn’t get the recognition they deserve.

Then, years later Stefano became the vocalist of il Tempio delle Clessidre, reforming Museo Rosenbach, and appearing in various collaborations from The Samurai of Prog, Wicked Minds, and Marco Bernard & Kimmo Pörsti’s conceptual story of Daniel Defore’s 1719 masterpiece, Robinson Crusoe. As he closes one door after another, he decided to release a solo album on the AMS label.

Entitled Dei Ricordi, un Museo, it is almost a final chapter of bringing his story to life with a little help from La Coscienza di Zeno’s keyboardist and bassist Luca Scherani and Gabriele Guidi Colombi, Mr. Punch guitarist Macella Arganese, and Panther & C’s drummer Folco Fedele to the line-up. When you listen to Stefano’s solo debut, it is his answer to Elton John’s Captain Fantastic and the Brown Dirt Cowboy.

It’s a journey that Stefano has embarked on from Museo to Clessidre, and where he is right now. There is the modern textures that the rhythm section bring to the table by giving Stefano that big, giant push of where the next adventure will take him.

Beginning with ‘Cuore’ you can get a sense of continuing where the ‘Zarathustra’ suite had left off. Scherani and Arganese bring in enough powder kegs in full force by transforming the piece into an epic-like overture.

You can feel the power between those two while Stefano sings majestically to have the golden-era of the Italian Prog-Rock movement come to life once again in the year of our lords, 2021 and 2022. ‘La Morale Cede’ is a sonic attack of the tragic senses, detailing something gone wrong.

Lupo and his band of brothers walk into unexpected time changes, metallic roars, and synthesised organs filling up the leaning tower of Pisa with nods to both Premiata Forneria Marconi and French prog maestros, Ange. Luca’s moody piano intro on ‘La Stanza E L’angolo’ brings forth the sounds of Locanda Delle Fate and Murple. Once again the RPI movement is flowing beautifully to bring a sense of darkness, grey clouds, and pouring rain.

The second part of the title-track goes into a continuation once more from ‘Degli Uomini’ as Luca brings in the heavy guns between Hammond organ and synthesizers to channel Pit Corradi’s arrangements whilst walking into this mystic-folk landscape. There is so much mystery behind this track.

You get a sense of fear, loneliness, and the strength to move forward in your daily life. But once the tremors start trembling across the midsection, that’s where Lupo starts to call out to the gods in a duelling attack with some heavy back-up from drums and keyboards before sunlight comes crackling through the dark clouds for a glimpse of hope in this climatic twist.

‘Le Due Linee Gemelle’ takes listeners into the breathtaking beauty of the mystic caverns and the panoramic caves of Davetashka. Lupo gives Luca a chance to break out the latter Floyd experimentations that he, Macella, and Folco create in the song.

The first minute of ‘Sterile’ pays homage to the folky acoustic textures from I Giganti’s conceptual life about the Mafia on Terra in Bocca before breaking out the dance of death from the rhythm section. Tidal waving midsections come at you at a split second before the waves crash into the town nonstop whilst calming down to take a breather from Fedele.

Just as Stefano closes the book on ‘L’Amante’, he leaves one final word for Luca to bring out the lullaby-sque keyboards and wing-spread mellotrons, flying off into the night. There’s a strong sense of Klaatu’s Hope-era and La Coscienza’s Sensitivita-era to bring it all home.

What a ride that Stefano brought us on with Dei Ricordi, un Museo. It brings everything to its original source, knowing how far he’s come. Through the rough storms, the good, recognition, misunderstanding, and tending a light at the end of the tunnel, Lupo has reached the mountain top by ascending upwards to finally see that ray of light in all of its glory.