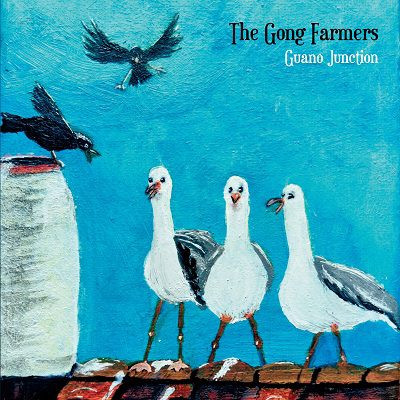 Guano Junction by The Gong Farmers

From the acoustic-driven, train-chugging sax journey of ‘Drive’, you get a sense of driving into this ghost town, filled with rust, rubble, and abandonment of a city that once was, has now turned into nothingness. The music itself, is a continuation of where Comus’ First Utterance had left off thanks to Alex Che’s vocals, Keeling’s intensive flamenco vibes, and Jackson’s sax filling up the night-like sky.

Launched in 2018 after their visit to an Irish castle, The Gong Farmers took its name where its farmers who would dig out to remove….human fecal matter. Don’t ask me why,  I don’t want to know, and I really don’t want to know. And that’s that.

Mark Graham and Andrew Keeling are the brain child’s behind The Gong Farmers by bringing in a different form of music that combines experimental, ambient, folk, classical guitars, bossa-nova, and symphonic beauty. And it’s all here, waiting for us to hop aboard the Guano Junction.

Now this has nothing to do with the Angel’s Egg, Camembert’s, Pot Head Pixies, or heading towards the Isle of Everywhere, but The Gong Farmers have a very eerie quality to their sound. The two-parter ‘As Sunlight Falls’ starts off with a spooky landscape, post-Krautrock vibes detailing a horrific tragedy that’s occurred.

The striking string sections done by both Mark himself and Ricardo Odriozola, have set up this gruesome detail with disturbing imagery that is hard to look at. Then going down to Keeling as he pays homage to Mason Williams on ‘Vista de Toledo’. Meanwhile Che is detailing the decline over the loss of a complicated dancer who had everything, fame and fortune, but became paranoid and delusional in her own world with no turning back on ‘Evergreen’.

‘Shave!’ becomes a trip-hop turned into a form that would have made Delia Derbyshire very proud of, seeing The Gong Farmers time-travelling towards the BBC Radiophonic Workshop in the mid-60s. Cut to the gentle piano sounds of a mournful ballad by saying farewell to their loved ones across the grey ‘Dark Skies’ before taking a train ride over a bass loop, Ben’s chugging guitars, and a synthesized star-gating tunnel for a lovely ‘Wednesday Afternoon’.

It may not be everyone’s cup of coffee per se, but they really take it up a notch by creating their own technique. And it’s a real mean team.