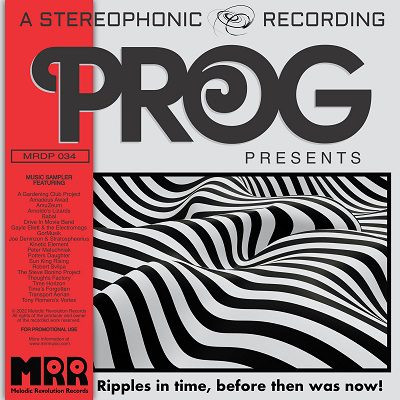 PROG PRESENTS… Discovering Melodic Revolution Records – Ripples In Time Before Then Was Now! by Various Artists

Launched back in October 2004 by Nick Katona and his wife Jennifer, Melodic Revolution Records originally started out as a music store in Clinton, NY selling CDs, DVDs, Vinyl, and memorabilia. Cut to a year later where they added an art gallery and called it the “Revolution Gallery.” Then it became a live venue known as Live at the Revolution for evening performances, the museum by day, the concert by night in 2006. MRR became Clark Kent and Superman to that point which worked very well I can imagine.

And that was where the launch of the label started. Nick has been bringing the progressive music to a whole new world from bands and artists such as; Corvus Stone, Scarlet Hollow, Time Horizon, Kinetic Element, Joe Deninzon & Stratospheerius, and Potter’s Daughter to name a few.

That and this incredible compilation done by the good people from PROG Magazine who issued it back in July of this year in number 131. It gives you front-row seat on how far Nick and Jennifer have come a long way to bring more journey’s to with Melodic Revolution Records. Not to mention some of the most enduring centerpieces that the label have taken listeners on this yellow brick road to their answer to of Emerald City where they welcome you with open arms and give you an insight on what they’ve brought to the kitchen table.

From the gentle lullaby-sque arrangement with Randy Rhoads’ classical motif, followed by moody synthesisers for a country-driven ride into the sunset with Thoughts Factory’s ‘Nightfall’, to the sadden tragic figure of the ‘Lonesome Clown’ from Amadeus Awad with Anneke van Giersbergen handling the vocal lines. I was quite taken aback hearing Amadeus Awad working with Anneke on this track. Listening to this song, it has a crossover effect between Renaissance, Magenta, and unsung heroes of the Acid Folk genre, Trees’ 1970 debut release, The Garden of Jane Delawney.

When I heard the 12-minute epic, I felt not just the Folky aspects, but the heavier metallic guitar lines coming at you with bombs dropping from the sky ready for the attack. Anneke brings the house down on this epic. You can hear elements with her collaboration from Arjen “Ayreon” Lucassen during The Gentle Storm sessions. And boy do they bring in more thunderstorms as far as the eye can see that would have made the music label InsideOut very pleased of what Anneke is doing.

Then it goes into the doom metal approach which was quite unexpected for Melodic Revolution Records to delve into their territory from Transport Aerian as they channel early Sabbath, Candlemass, Ladbroke Grove’s High Tide, King Crimson, and Peter Hammill serving jasmine tea to them in an English countryside that is snowing nonstop on this clock-ticking arrangement for ‘Skywound’. I had no idea that Nick knew his Metal well by having a band like that!

Time’s Forgotten’s symphonic approach with train-chugging guitar riffs, goes at 600 miles per hour with machine gun eruptions between synthesisers, bass, and drums for the ‘Moments of Clarity’.

There are the unexpected time changes in the midsection from the rhythm police as they keep up the pace with some brutal metallic arrangements as Kinetic Element’s ‘All Open Eyes’ reveal a beautiful 15-minute epic opera that’ll get your popcorn and soft drinks all ready to witness a mind-blowing movie that’ll knock both Disney and the Marvel Cinematic Universe out of the ball park.

Just as we get to the final curtain calls, the spooky vocal calls of Potter’s Daughter with Dyanne Potter Voegtlin’s arrangements, sends us this lost letter for the bass, drums, and thumping grooves on ‘To My Love’. She pours her heart out by crying out the gods on the mountain tops as she challenges herself by staying on top through the hot, humid, cold, and heavy snow stormy weather’s that approach her.

And she’s still standing, not backing down without a fight. Tony Romero, who has been presenting his own internet radio show with House of Prog nearly nine years ago which I would listen to during my time in College, goes into the Vortex sounds by channeling not just Delia Derbyshire’s BBC Radiophonic Workshop which was home scoring the themes of the original Doctor Who series in the ‘60s, but delving into the underwater cities of the krautrock genre with Cluster’s Zuckerzeit-era by walking towards the ‘Noise Machine’.

Close your eyes now and think to yourself back into the Arena Rock years in the late ‘70s, early ‘80s and a band like Time Horizon, follows the footsteps of early Styx meets Aviary, Boston, and Van der Graaf Generator with brutal heavy guitar and organ riffs floating those dark, grey clouds as it pours a shit load of fiery attacks for ‘The Great Divide’ and into the Mediterranean sea at ProgStock as Joe Deninzon & Stratospheerius bring the house down for ‘The Prism’.

This here is a killer compilation release to prove how Melodic Revolution Records have come a long way. They prove that the genre is more than just a four letter word. For Nick, he’s keeping that machine going, stronger than ever. And I hope in the years to come, there’ll be enough escapades Nick will embark on by taking over Indiana Jones’ place.