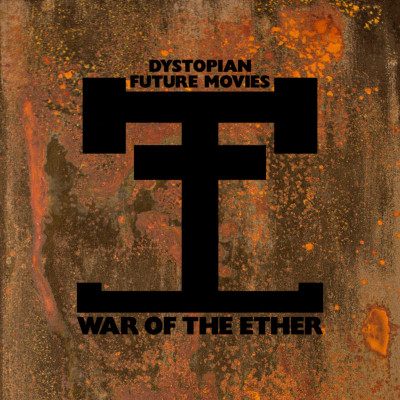 War of the Ether by Dystopian Future Movies

“War of the ether” is a phrase which was coined during wartime to describe propaganda, I suppose broadcast propaganda, pushing lies and misinformation out into the atmosphere, to soak into the minds of the listeners. War of the Ether, the third album by Nottingham-based three piece, Dystopian Future Movies is also about propaganda, the giant pious machine of obfuscation and denial that surrounds the Catholic Church of Ireland when it comes to its terrible crimes against unwed mothers and their children. To be specific, this record is about the Bon Secours Mother and Baby Home in Tuam, Galway, where hundreds of children died from malnutrition and possibly worse, neglected after the home failed to secure illegal but valuable adoptions for them in America. To be even more specific, it imagines the horror, confusion, bitterness and unfathomable sadness of the mothers who had their babies ripped away from them.

This is not an easy listen and this is not a subject to be tackled in song lightly. Caroline Cawley, lead singer, songwriter and guitarist in Dystopian Future Movies is originally from Sligo, so she will have been aware of this scandal when it began to surface ten years ago and knowing the land and its people she has been able to create a sensitive, vivid and genuinely emotional response to this tragedy. I have already read of reviewers being reduced to tears listening to this album. This is a record that can make you angry. Not in a boneheaded, Fred Durst-style “let’s smash stuff up” way, but it can instil a coldly furious rage. Cawley’s vocals throughout, as is usual for Dystopian Future Movies, are controlled, poised, heartfelt but in service of her lyrics. It’s the lyrics that cut, the wounds are quick and cumulative, eventually bleeding you dry. The music is a series of exercises in atmospheric tension and release. Water torture drips of tension broken by explosions of ungovernable rage.

The album runs in a pretty straight linear narrative, from a poor teenage girl being abandoned by her boyfriend, through pregnancy and childbirth at the home, her baby being taken away and then her dealing with the shame, anger and eventual defiant rejection of the church. Without access to a lyric sheet the story takes some piecing together, but the feelings and emotions are portrayed plainly and sharply throughout.

The album couldn’t work half as successfully as it does without the presence and positioning of its first track, ‘She From Up the Drombán Hill’ – a ten minute spoken word masterpiece of poetic perfection. The music is like a gently lapping tide, occasionally rising to a sudden squall of doomy chords whilst Cawley in her hardest Sligo tones summons an Ireland of icy, dripping moons, peat fires, rusting gates, suffocating isolation and crushing poverty. Bill Fisher’s drums are like the jazzy hissing of a steam-powered machine, ever present and relentless, inescapable as the girl’s fate seems to be. It ends as the truth of the girl’s swelling body is no longer avoidable and the inevitable calling for the priest with the devastating line “there was nothing left now” as a simple, brutal riff increases in volume and power. In truth, so brilliant is this number that you would be quite happy for it to continue in the same manner for the rest of the album, but the other seven tracks revert to traditional singing style for Cawley. You are none-the-less hooked, desperately and hopelessly sucked into this horror story.

There is nothing on this album as conventionally rock-ist as say, ‘Black Cloaked’ from the band’s last album, but second track ‘Critical Mass’ certainly matches its heaviness. The strummed guitars ride above a martial beat as Cawley asks repeatedly “Where is love and I should go” into an almost black metal turmoil conducted by Cawley and second guitarist, Rafe Dunn. The sense of a young girl trapped, confused that her feelings of love and their consequences should produced such bitter fruit are shockingly, painfully revealed.

There is plenty of light and shade in the music throughout War of the Ether but the lyrics remain unsurprisingly bleak and righteously angry until the closing numbers, where a sort of resolute, indomitable spirit emerges, unwilling to be defined and cowed by the church and its beliefs. ‘No Matter’ begins as moody, post-metal creep and gains in confidence with surging and peeling riffs, thunderous crashing drums and moves ever-louder into the languid, somehow valedictory, ‘A Different Class of Girl’. These songs seem to deal with the long term effects on the young women involved, forever haunted by their experiences, grieving mothers without graves to visit, refusing to believe themselves to blame, rejecting the church’s appalling hypocrisy in thinking these unwed mothers as sinful. As the final song falls into a balmy swirl of guitar solos it suddenly drops to just Cawley’s voice and the refrain “You regard yourself this way for no one”.

An absolute triumph, this album is a true work of art and deserves all the plaudits it is bound to receive.