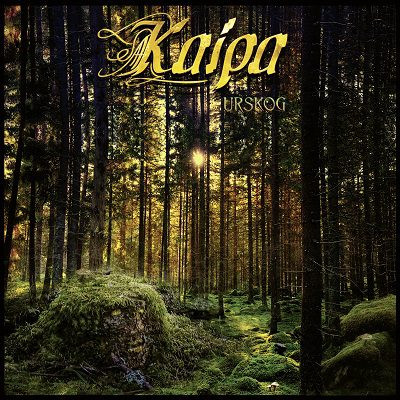 “Winter’s been so long
Like an endless frozen song
With a conductor carved in ice
And every note is like a sacrifice
To the dead of the NIGHT!”

How do you write a lyric like that? It is a perfect way to start things off from Sweden’s own Kaipa as they unveil a true gem of their 14th studio release, Urskog. For nearly 50 years and various line-up changes, Kaipa have kept the Prog flag waiving and never putting it down. They have stayed true to being who they are. From 1975 to 2017 they have released 13 studio albums, and have taken listeners to unbelievable worlds and spellbinding stories with incredible results.

On Urskog, Kaipa are inviting listeners to their flying carpet through the changing seasons and beyond the Swedish wilderness. Lundin’s textures takes you inside the IMAX screen and his journey through his biking treks and viewing the location of its country sides, coming to life.

From the moment the opening 18-minute epic ‘The Frozen Dead of the Night’ begins, it starts off as an animated opera. We witness a mournful atmosphere of the princess struggling through the loss of her loved ones in the dreadful snow storm, before she starts to rise up and have her powers shine through the eruptive drum work of Darby Todd and Lundin’s keyboards, giving us the first glimpse of the sun.

The midsection has a walkthrough of the cold, wintery crosswalks that Todd, Lindin, Reingold, and Nilsson encounter. Taking various witnesses over the gorgeous imagery, they bring more of their power inside of their instruments.

Heart beating vibes are also an important fragment to give them a bit of a break before soaring through the skies once more with a majestic swoop! Once Aleena comes in to sing ‘In a World of Pines’, she’s finally spread her wings and begins to follow Lindin’s guide as he takes her to the locations that are out of this world.

You can hear the beauty of the Blue-era from Joni Mitchell, Magenta’s Christina Booth, and Renaissance’s Annie Haslam in Gibson’s vocal lines while Nilsson’s gorgeous arrangements, shine through the oceans with Reingold’s intensive bass walk, honoring John Coltrane’s ‘My Favorite Things’ with a twist of Gershwin’s ‘Rhapsody in Blue’.

When I heard the opening notes on the title-track, there’s a bit of a reprise on ‘The Frozen Dead of the Night’. Kaipa knows their stories very well before getting down to some intense exercise work-out, honouring the intro of Rush’s ‘The Camera Eye’ from their 1981 masterpiece, Moving Pictures. Brick by brick, stone by stone, Reingold gets down to business by bringing the house to life.

With help from the gorgeous backgrounds of the mellotron and mid-fast guitar lines, the unexpected time changes come in handy with an arpeggiated twist. Meanwhile, Lundin goes in for the kill on this fiery spread throughout the ‘Wilderness Excursion’. Leaning towards a chance to bring enough water to put the flames out, Todd and Nilsson get enough buckets before Hans blares more of the synth-attacks while hell has broken loose in a massive wildfire.

Elin Rubinsztein brings this medieval approach on a peaceful dance ‘In The Wastelands of my Mind’. Once she enters the folk-like paintings, Kaipa bring out their acoustic instruments and high-praising vocal styles to capture the first day of spring in all of its glory. After going through months of a massive cold weather, the weather suddenly changes very quickly.

Between the styles of French prog maestros Atoll, Gentle Giant, and Peter Gabriel’s ‘Solsbury Hill’, Patrik pours his heart and soul into this bad boy. He knows that the rhythm section has his back, no matter what. The closing 15-minute epic ‘The Bitter Setting Sun’ lets listeners know that while the ride is with turbulent, beautiful, instrumental passage ways, and a hope for a new day, Kaipa must realise that all good things must come to an end.

Once Patrik and Aleena enter the spotlight once more, they address listeners on the autumn coming back each year, making sure everything will be perfect in the next book with massive rain dropping effects in Herbie Hancock’s territory during the Headhunters period. Olof’s sax brings a smoky effect to come centre stage as he blares out one note after another, before the band heads into the Merlin-era of Kayak.

One story after another, Kaipa are still growing stronger and keeping these continuous stories, more tighter than ever. And they still have it, many years later.