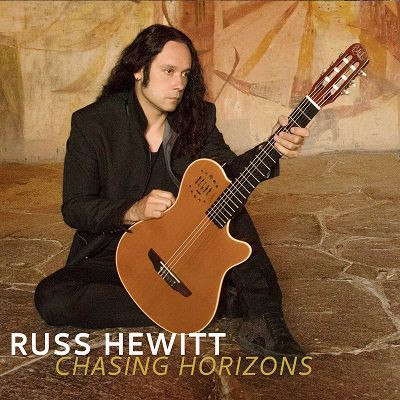 When I think of guitar players that aren’t just big names from the top 100 that are mentioned dozens of times from various music magazines, I think of the ones that made sense to me; Terje Rypdal, Alex Lifeson, Michael Hedges, Ottmar Liebert, Alex Skolnick, Buck Dharma, and of course, Robert Fripp. They’re the ones that made sense to me many years ago. And it made me open my eyes more and more besides Clapton, Page, and Slash.

But there’s one coming from the lone star state that has a distinct style with flamenco touches, and lighting-strike positions. His name is Russ Hewitt. Russ has been part of what is known as the Nuevo Flamenco Movement since 2008. It is a surpassing form that transforms the traditions of the genre into something far more artistic and with esthetic configurations.

His latest release, Chasing Horizons, sees Russ breaking the rule book and following the torch of Michael Hedges. He takes listeners into the landscapes of the cities of Brazil and Mexico. And to be allowed to have Nuno Bettencourt, Marty Friedman, the Bucharest All-Star Orchestra, and the guitar duo Jorge Strunz, and Ardeshir Farah. They are there to lend Russ a helping hand by bringing his new album to life.

‘Vivir Libre’ sees Russ and Marty going for a warm walk into the beaches with incredible finger work that becomes an intense work-out, going into a full-speed run for the bossa-nova sun to bring out the massive heat for the two maestros. ‘Luminous’ starts off at first, an echoing ambient voyage of the mystic caves, filled with wonder.

But just as he leaves the location, he looks at the glowing blue skies with beautiful keyboard and percussion work done by Bob Parr and Efren Guzman. He makes a walk to the Temple of Kukulcán by dancing to the beats on his instrument whilst his bandmates follow him until reaching the end of the composition.

Nuno’s guide on the title-track, goes into a dangerous tightrope dance of the tango. You feel the challenge, you feel the sweat off your brow, and never knowing when the rope is going to be cut or not. But the details make it more challenging and more exceptional by reaching the climatic end as ‘Luna’ has a bit of a mournful nod to Radiohead from their sessions from Hail to the Thief.

The Bucharest All-Star Orchestra goes into a joyful celebration as they bring in the pouring rain to clear out those stressful afternoons with ‘Amor Perdido.’ There’s the mystery, shining string sections, and nods by adding a twist of lemon of carrying a little tribute to Gentle Giant’s ‘Isn’t it Quiet and Cold’ from the chorus section in the piece.

Next up, Ardeshir leads Russ into a mid-stomping groove by having another cup of coffee in these crossovers of Ottmar Liebert, Traffic’s ‘Glad’ from their 1970 landmark John Barleycorn Must Die, and Focus alumni Jan Akkerman, by going to the flamenco fires at the ‘Cubalia Café’. I can imagine those two are having a ball on this track.

Not only lending the café with bright, bright lights, but adding enough samba’s to keep the customers satisfied with these Santana-like sections at the very end. For Chasing Horizons, they are Russ’ wings, waiting to be spread across the heart of Texas.

Throughout the beautiful landscapes that will lead listeners, looking for a chance of escapism, it helps them to be free from all of the craziness that’s going on, then and now.