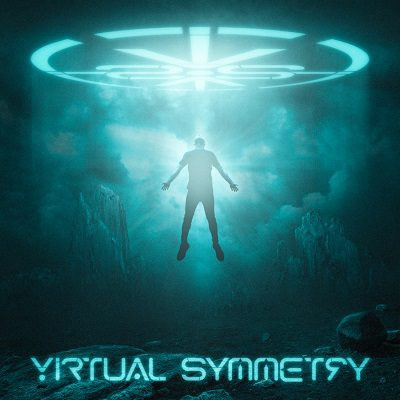 Originally starting out as a solo project in 2009, guitarist Valerio Æsir Villa came up with the genesis of Swiss-Italian prog metal group Virtual Symmetry. And they had come to life with the 2016 debut, Message From Eternity. Once it starts taking a life of its own, he finally gets the ball rolling.

Despite line-up changes, the band are their own true self by taking these two sections of music in a whole new way. While this is my first time listening to the band’s music on their third sole self-titled release, follow-up to their 2020 Exoverse album, they took me on a ride that is out of this world.

Alongside Valerio, the band considers bassist Alessandro Poppale, drummer Alfonso Mocerino, keyboardist Mark Bravi, and lead vocalist Marco Pastornio. This is Metal at its cinematic best to bring these incredible images to life on the silver screen.

Listening to this album, it reminded me of going back and listening to the first three Haken albums all over again. They bring in the fire, psychedelia, Maiden-like riffs, power, and epic-symphonic structures that await you.

The moment the opening 20-minute title-track begins, it kicks the door down by becoming this operatic suite from start to finish. And we ain’t talkin’ about Dungeons & Dragons there, fellow nerds. No we ain’t talking about that, we’re talking about a true story that the band have brought to the kitchen table with warm spices that’ll whet your appetite.

Massive organs, climbing stair casing riffs, ranging vocal styles, and drums setting each of the temperature levels going up with various stories that Marco pours his heart out. For Valerio, whenever he plays, he goes right down the line.

With Mark’s nod to The Doors’ Ray Manzarek, he goes from one ship to another. And that ship is Banco del Mutuo Soccorso from their Darwin years. But once they sail ship into the Atlantic Oceans from ‘My Story Unfolds’, both Valerio and Mark duke it out in the wrestling ring. From crashing waves, and bringing out more incredible thunderstorms that hit like crazy, Pastorino calms them down as they plan to hit shore at any second.

After going through some heavier attacks, they come back with snarling blood-thirsty monsters and calming summits for the crystal ball exposure on ‘The Paradise of Lies’. It details a celebrity who’s in the public from the tabloids, the media, and always trying to put a smiling face for movie premieres, awards, and Late Show appearances to be interviewed.

But there’s a dark side to it. The persona on this person’s life becomes a massive tidal wave as the skeletons in the closet are revealed to the public on how much they damage they’ve done to themselves, and being a bully on the set and being abusive to your loved ones.

‘Come Alive’ pays homage to Haken’s ‘Nocturnal Conspiracy’, The Gentle Storm, and Iron Maiden’s The Number of the Beast-era, it’s all of those combinations coming together as one before laying down some of that garage rock attitude of the ‘60s organ from the first volume of the Nuggets box set. That’s a crazy combination, but Virtual Symmetry know how to get their influences in the wings.

While the band have kept a tight grip, everything starts to go clockwork. ‘Fantasie Di Verita’ is the band digging frantically to see that light at the end of the tunnel. Licks and amazing flourishes, it brings to mind the world of Steve Hackett. From the misty waters on the Voyage of the Acolyte, to entering Queen’s territory in the final section during their Days at the Races peak.

Valero reveals his inner nod to both Hackett and Brian May into one giant smoothie as he goes from bringing in the midsection on ‘Somebody To Love’ with a big finale. For Virtual Symmetry, they aren’t just a prog metal band, they are their own sound and vision. With audiovisual-like beauty, and probably the brotherhood between the four members of the group, it is an epic paragon that they’ve unleashed for 2022.