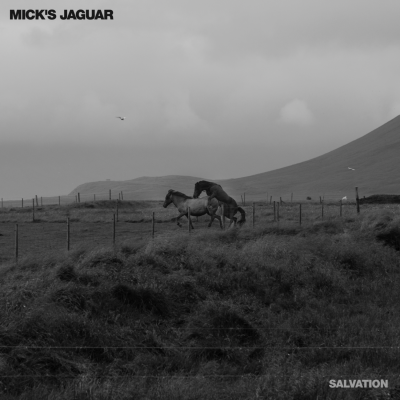 The cheekily titled Mick’s Jaguar makes more sense knowing the band were originally formed as a one-off Rolling Stones cover band, but as John Martin described in an Echoes and Dust interview “in a Pussy Galore sort of fashion”. While there are traces of the Stones in their debut album Fame and Fortune and in the follow up Salvation, it is with fellow 1970’s rebellious punk rockers the New York Dolls, The Dictators, and especially AC/DC which are heard more prominently. Or, to put it another way, the band reimagine the Bon Scott era rockers out on a Saturday night binge in a New York bar being served by Johnny Thunders. If this sounds like your kinda night out, then Mick’s Jaguar are a band for you.

With Salvation, the band maintain the familiar sounding catchy puck charged, rock ‘n’ roll tunage, full of refreshing vigour, and as clear as daylight sense that the band love what they are creating and playing. From the off, chunky riffage and earworm soloing form ‘Skin Contact’ and its “more more more, please please please” brings a smile. While Chuck Berry, AC/DC, and Johnny Thunders blend to pleasing effect in ‘Handshake Deals’.

The band are obviously formed by influences of decades’ past, but are no copyists, and they sound like they are having too much fun to care about fitting in with the latest fad sounds. And when ‘Man Down’ throws the gauntlet down with a tinge of Metallica’s ‘Search and Destroy’ riff, the band open the possibilities of what Metallica could have sounded like in a pre-NWOBHM influenced age.

The bad boy boogieing continues apace with ‘Molotov Children’ and ‘Speed Dealer’. Though the album’s highlight is the closing ‘Georgian Pines’. Its slightly different take, and the twist in the tale is provided by Grace Hollaender’s softer layered vocals, while the band rage like the Drive By Truckers in a race to get to the bar.

The problem with making a storming debut, is the sophomore album will be compared to it. While Salvation has many highs, there are a couple of songs – ‘Nothing to Lose’ and ‘5am’ – that just fall short of its surrounding heights and so loses the consistent flow Fame and Fortune contained. It also took me a few listens to get used to John Martin’s extra gruff vocal delivery this time around.

However, despite those couple of misgivings, Mick’s Jaguar is still the sound of a band clearly enjoying keeping the rock ‘n’ roll flame alive. And, we need them! Salvation is a good rock album.