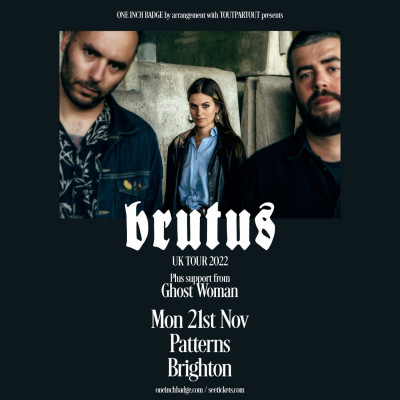 It’s been a busy few months for Belgian post-hardcore/post-metal three-piece Brutus, with the October release of album Unison Life and a UK tour including their biggest ever UK headline date at the Garage in London. We went along to the penultimate date in Brighton to see how the record weighed up live.

Opening with the lead single off Unison Life, ‘Liar’ into ‘Horde II’ from debut album Nest, the band exploded into a wall of sound before breakout single ‘War’ changed the pace for a moment,  also setting the tone for the setlist that wasn’t just a tour for the new album, but the whole back catalogue.

On paper you could be forgiven for wondering how a three-piece whose lead singer is also the drummer could create much of a stage show, however Peter Mulders and Stijn Vanhoegaerden’s constant movement and infectious love and enthusiasm for their craft made for an incredibly engaging experience.

‘What Have We Done’ slotted in mid-way through the set proved to be a masterstroke, allowing for a moment of calm following ‘Brave’ and ‘Techno’ from 2019’s Nest. What was also evident in the setlist was the evolution in Brutus’ sound from their first album to the present. While ‘Justice de Julia II’ and ‘Horde II’ still packed a punch, they were notably less expansive or grandiose than the band’s newer material. This also shouldn’t be interpreted as a negative, it’s exciting to see so much progression and development in such a short period of time.

Stefanie Mannaerts’ truly extraordinary vocals deserve their own paragraph. At her best there is no-one else in the scene that comes close to the dynamic range and emotion Mannaerts projects. From the raw screams of ‘What have we done’, to the sorrowful cries of ‘Sugar Dragon’, her performance jumped between electric and devastating. A truly unique performer.

For a three-piece and with only three albums to their name, the sheer expanse and accomplished nature of Brutus’ sound is truly extraordinary to experience. During songs like ‘War’ and ‘Victoria’ it felt like there were 10 people on stage, not three. With festival slots next summer already announced at Download and ArcTangent, 2023 has the potential to be a breakout year for the band. These songs are made for bigger stages and they deserve to be there.