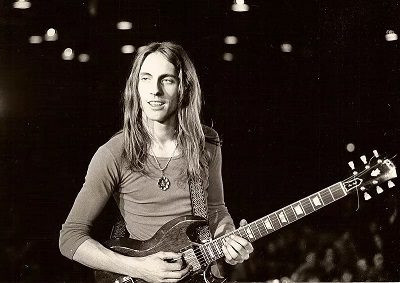 “The first LP was by a Kosmische power-rock trio of gargantuan size. Sure it was a fucking cosmic freak out. But it was played by Renaissance Man and Cosmic Man at the same time. They were here to go. But all in good time.” Julian Cope’s description in the eighth chapter about Ash Ra Tempel from his 1995 book Krautrocksampler which details both the legacy, and the history of genre, speaks volume. He realized that Ash Ra Tempel were beyond the space rock voyages, beyond Hawkwind, and beyond Iggy Pop and the Stooges.

They were down, fast, hard, menacing, ambient, psychedelic, and getting down to business. For Manuel Göttsching, one of the founders of the band, he created these hypnotic effects on his instrument by taking listeners, not just on a stoner journey, but a surreal nightmare that is waiting for you. Since his passing at the age of 70 on December 4th this year, he left an incredible legacy that will never die.

Growing up in West Berlin, he listened to classical operas thanks to his Mom. From Verdi to Puccini, he knew that he wanted to go beyond that sound. He started listening to radio stations that were run by the American and British allied forces. From Motown music to the Stones, to the British blues band, he moved classical guitar to electric and plugged in.

When he formed Ash Ra Tempel 52 years ago, he didn’t want it to be a Blues-based band, he wanted the sound of Ash Ra’s music to be free-formed, different approaches of improvisational music, but use the textures of the Blues in a various form. When you go back and listen to those first two albums that were originally released on the Ohr label in 1971 and 1972 (Ash Ra Tempel and Schwingungen), it sends shivers down your spine.

I first became aware of Ash Ra Tempel’s music back in 2006 after hearing ‘Der Vierte Kuss’ from the 1996 box set, Supernatural Fairy Tales: The Progressive Rock Era originally released on the Rhino label. It was like an ear-listening experience of a massive jolt of electricity coming at you with six cylinders. And that was where I was properly re-introduced to the world of what is known as the krautrock scene.

Bands and artists alongside CAN, Faust, NEU!, and Amon Duul II, I discovered Klaus Schulze, Cluster, Harmonia, Tangerine Dream, Popol Vuh, Agitation Free, and La Düsseldorf. You can tell that The Mars Volta, David Bowie, John Lydon of Public Image Limited, Acid Mothers Temple, and Pete Shelley of The Buzzcocks who wrote the sleeve notes for CAN’s compilation Cannibalism originally released on the United Artists label in 1978, were inspired by the genre.

It was almost as if they were saying to their fans, “Listen to these bands. They were a big impact on us growing up. It’s more than just the ’70s Glam Rock scene that were part of our D.N.A, but the rising sounds of the Berlin School of Music were like massive volcanos, waiting to explode at any second.”

But for Ash Ra Tempel, it was like searching for the Treasure of Sierra Madre. While I never got the chance to see Manuel live, it was Ashra’s music and his 1975 solo debut Inventions for Electric Guitar which was released under the subtitle Ash Ra Tempel VI, it was Gottsching on guitar only.

The amazing thing about Inventions for Electric Guitar, was that not only Manuel was using loops and various pedals that he would create to honour Terry Riley’s textures, but using ostinatos to continually repeat various phases. For example on the opening track, ‘Echo Waves’ I can tell that Steve Hillage might have been inspired by his arrangements and used it on the L album by tipping his hat to the maestro.

And we ain’t talking about meditating vibes, we’re talking about a spiritual guidance that takes us on a whole new level. Going back to Ash Ra Tempel, the opening ‘Amboss’ from the sole self-titled debut, it is a killer introduction at 19 minutes and 51 seconds. You have this ambient, surreal vision of look-out Mountain with Klaus Schulze’s ride cymbals setting up the dark, grey clouds coming over the horizon in the first three minutes of the piece.

Then, it’s off to the races! Both he, Manuel, and Hartmut Enke make the jump to light speed as they go into this 15-minute freak-out that would have made Green Day shit their pants like there’s no tomorrow. This would have made Hendrix very proud of what he would have seen coming throughout the landscapes of Germany, and Manuel’s howling improvisation with blistering frets!

In an interview that Manuel did at the Red Bull Music Academy with Jeff Mao in September 2018, he talked about the common promotion about the band’s music, “Music had to have some meaning and you had to explain, why do you make music and what’s the reason and what do you want to express with your music, so you had to find something.”

His subliming atmospheres make Ash Ra Tempel’s sound, like roller-coaster rides that are dangerous, and expanding more vertical loops that you’ve never seen before. From the galloping ride into the Tibetan book of the dead period of free-jazz on ‘Darkness: Flowers Must Die’, Timothy Leary’s guidance of a spiritual voyage on ‘Time’, the Ummagumma-era nod on ‘Jenseits’ with Rosi Müller’s spoken dialog, and the loss of innocence in the middle of the desert with ‘Quasarsphere’.

Those centrepieces and many more throughout his discography, will inspire the next generation in the years to come to discover this incredible form of music. Babe Ruth said it all in the 1993 movie The Sandlot, “Remember kid, there’s heroes and legends, heroes get remembered, but legends never die.” It still brings truth then, and it still rings it now many years later.