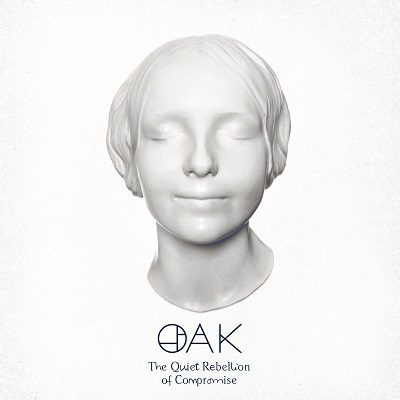 The Quiet Rebellion of Compromise by Oak

Four years ago something extraordinary happened. I was looking around on the bandcamp page of Karisma Records, looking at which band or artist would tickle me fancy. One of those bands that took me on a whole other level was Norway’s own Oak. Their 2018 debut False Memory Archive was like a breath of fresh air combining progressive, pop, and alternative textures that’ll make you want to dig out your old Kscope records.

Now in 2022 as the year comes to an end, Oak have returned to the forefront once more with their latest follow-up The Quiet Rebellion of Compromise. This is a unique second studio release where the band have moved from shorter songs, to longer forms of material.

The themes throughout the album deal with suicide and psychic health. Yes the music stays with you, but it comes with a message that is opening up the crystal ball to reveal our dark side and confronting it heads on.

‘Highest Tower, Deepest Well’ opens with a droning effect to reveal a measure of someone going off in a split second after coming back home from overseas. The blaring guitar riffs, clock-ticking keyboards, and surreal vocalisations, makes us go inside the person’s mind as the symptoms of P.T.S.D. (Post-Traumatic Stress Disorder) becomes a lightning rod to burst out at someone.

Elsewhere, ‘Quiet Rebellion’ is a semi-sequel to ‘We, The Drowned’. It has themes of a spaghetti western atmosphere, setting in this cold and drizzly weather, preparing for one final showdown between Gazpacho and the THRAK-era of King Crimson.

‘Sunday 8AM’ has a sense of a militant farewell coming to life, dealing with the loss of a soldier who took his own life after struggling with the haunting images, coming to life that flash before his very eyes. Galloping arrangements and piano concerto-like loops with mellotron-sque alarms, it is a cry for help. And it hits you like a massive, ton of bricks collapsing all over you.

The 13-minute ‘Paperwings’ is a cross between Steven Wilson’s Grace Under Drowning, Trent Reznor’s production levels, death metal, and David Bowie’s Outside-era, extending more of the diaries that detective Nathan Adler had left for the quartet. Hearing those crossovers on this epic that Oak have unleashed, it becomes a various movement from electronic, minimal, and deeper vibes of the domino effect, crawling all over your body.

The last three minutes becomes this massive attack as Oak blows the door down once more with a hardcore punch after another as the snarling monster comes to life with one final message by being brutal, honest, and filled with mechanism. It is a welcoming return for the band by bringing in those heavy subjects that sounds like something straight out of Christopher Nolan’s 2008 sequel to Batman Begins, The Dark Knight. And it’s an album that’ll be talked about in the years to come.