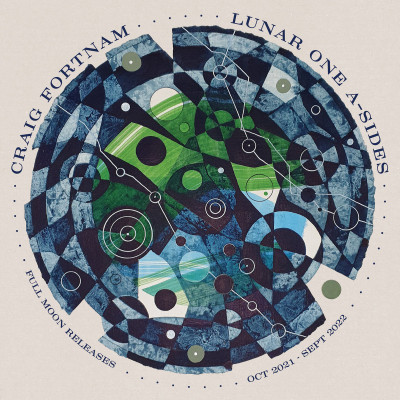 Lunar One A Sides / Lunar One B Sides by Craig Fortnam

Wasting no time in following up 2021’s Ark and 2022’s instrumental collection, Craig Fortnam returns with a loose concept album based around the lunar cycle from August 2021 to September 2022. Each of the tracks on these recordings was mostly made in the month in which each full moon appeared and released when the moon was at its fullest as singles. The Lunar One project brings all twelve singles together (the A Sides) in an album format – available to buy on the media of your choice – and is accompanied by a sister album (of B Sides) which you can buy or name-your-price for on Bandcamp. It’s worth getting both.

Fortnam is well known in wonky music circles as a close associate of Cardiacs and played in several bands staffed by alumni of the same (Lake of Puppies, Shrubbies), he leads the superlative North Sea Radio Orchestra, and with James Larcombe performs as duo Arch Garrison (Larcombe also features on this record). 2021’s solo outing, Ark, was a gorgeous exploration of the islands of the UK, (one kind of ark), and considered or observed the effects of climate change on the natural world (one reason for needing an ark) and the tensions between a rural past and urban modernity. On Lunar One, Fortnam’s eyes are cast aloft to the night-sky and the distant but comforting satellite which has such a remarkable bearing on the seasons, nature, all our lives. I guess, for want of better nomenclature you could call it Were-Music.

Not that the moon is the focus of the material on both records, rather it works as a marker to the natural cosmic passing of time rather than our industrialised sense of seconds, minutes, hours, which dictate all our waking and working lives. Thematically we pick up on the urban/rural refrains of Ark, plus the settings and motifs of Fortnam’s Instrumental Music 1 (released just this summer past). As you’d expect from Fortnam, he effortlessly mixes electronica, folk-music, classical guitar, but with an ever-present pacey modernity, presenting and weaving tales of ordinary life, natural observations, and longing for something undefinable – hiraeth as we would call it in Wales. There are numerous influences at play both musically and lyrically – I thought I heard echoes of Terry Riley, Robert Wyatt, Nick Drake, and Syd Barrett. I’m also sure I heard nods to Henry Mancini, The Stanglers, and Visage, but then I have something of a butterfly mind and scattershot ear, and there may be nothing of the sort – I hope though that we can all agree on the records’ beguiling qualities.

With the A Sides Fortnam follows in the footsteps of these luminaires (pun intended), but the B Sides follow a more experimental bent, incorporating ambient sounds, folky psychedelia, German Komische Musick, and even a Christmas song (a glorious ‘God Rest Ye Merry Gentleman’, which put me in mind of the Roxy Music side project: The Players and their Christmas album). “You’re here to work not dick around” he sings on ‘Even On Sundays’, given his work rate over the past could of years Fortnam isn’t dicking around either. Taken as a whole – and you really should take both records in a single sitting – he has produced one of the most diverse one-two punches of the year.