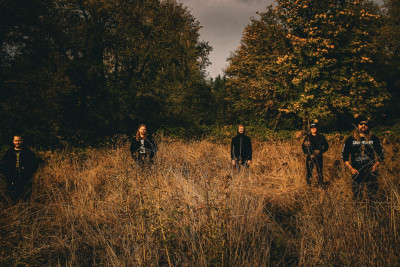 Not being able to look up your own band, it’s like kneecapping yourself.

Some artists make themselves mysterious and hard to find online on purpose but for other less fortunate souls external circumstances change their visibility and accuracy of data online. Portland, Oregon crushing Cascadian post-metalers Sól have spent a decade trying to gleam a presence in the musical world but are about to go through somewhat of a rebirth by changing their name to Unhallowed Earth. Song writer, guitarist and vocalist Rusty Powers sat down with Gary Davidson to unveil the first single ‘Wharf’ and detail the struggle not to be lost in the annals of the internet to ass cream and local rap stars.

Originally forming in 2013 as Sun of Light, Powers took inspiration from a Liturgy song title in a bid to hint at the black metal influence in the band and push out from the single post-metal label, this name was quickly changed as Powers explains:

“I thought that’s a cool name, thinking more towards the Pagan Sun worship sort of area. Then quickly realised that could be misconstrued into some sort of Christian thing and we were getting asked how clean our vocals or how clean our lyrics were by church people which seemed very odd. So we were Sun of Light for a hot second before we even got off the ground and then we changed to Sól just as an acronym but also in reference to old Norse folklore about the sun goddess and that seemed to fit us a lot better.”

As time progressed and the use of tools such as last.fm and Songkick began to flux Sól began to notice a number of odd interactions online and this added to the, erm, widespread distribution of a similarly named salted caramel bum cream:

“I would say not being able to look up your own band it’s kind of kneecapping yourself. To add insult to injury there is a very prolific rapper that lives three hours north of us in Seattle, I mean he’s playing Coachella he’s at that level. I remember booking our small regional tour using Songkick and I found that it had shown us playing with The Flaming Lips and a bunch of much larger acts and I was like, well that’s not good. I also realised that overnight we somehow had 10,000 followers, which is cool if they were to like our music, but they wouldn’t. I know a couple of the larger venues in town, when we play there they’ve had questions from other touring managers who point out that’s not the same act you meant, you might not want those guys that high up on the flyer. Then there was a local company that was selling ass cream of some kind and they used our same name and font.”

If ass cream was the straw that broke the camel’s back the pandemic certainly allowed the change to be set in progress:

“As much as I loved the simplicity of the name, it was easy to remember. In the back of my mind it’s always been that we should change the name at some point and given the line-up changes over time then Covid-19 hit and we were like “let’s get really professional about our band, let’s change the name”.”

As well as line up changes members own external influences are evolving, whilst not being a mammoth gap between the sounds and textures of Sól and Unhallowed Earth it did add to the decision to go ahead with the change of name:

“Our sound is still very similar to what we’ve been doing but I think with Charlie’s (Fischer – bass) experience in Armed for Apocalypse bringing more of a heaviness to what he’s doing and also I’m playing guitar and Tchornobog now so there’s more death metal and black metal influences as well. We’re going in darker places, we’re still keeping the kind of clean post-rock sensibility that we’ve always had but with kind of this progression. With the member changeover and with nobody being able to search for Sól unless you had a track title, we just knew it was the right time.”

Unhallowed Earth was the band’s choice of new name and where the original name invoked some Christian curiosity this one is most certainly a reaction to religion and the current state of politics.

“Unhallowed Earth has been more of a reaction to the Christian nationalist thing that’s been pervasive in our country for a long time. It’s been much more public facing within the last seven years due to whatever happened in 2016 that we don’t need to get into. We’re looking at the US approaching some sort of failed State status or there’s going to be some kind of collapse in the future. I’m a firm believer that due to inaction with climate change and these ‘strong men’ that are taking countries around the globe in the wrong direction that we’re going to see conflict and collapse. So with Unhallowed Earth it’s a return to what things should have been before Humanity got too greedy. Basically that was kind of the idea behind the name. We had some other names as well that we were kicking around but they were almost always like ‘oh it sounds too screamo’ or ‘it sounds too post-rock’ and Unhallowed Earth at the very least for us it just sounded like a tough guy hardcore band and we can live with that.”

As well as a similar sound range and continued writing process of Powers taking ideas, concepts and riffs to the band. Unhallowed earth also touches on the same genre points as displayed in first single Wharf which has all the dynamics of post-metal and post-rock with hints of numerous post and heavier genres but still Powers felt the time was right to put to bed the musical achievements of Sól and concentrate on the future, when asked if Unhallowed Earth is a name change or a new band Powers answered in statesman like fashion:

“It’s tough to say, I consider it both, although I am pretty strict about it. We’re never going to play Sól material live ever again, that’s not going to happen. We’re not going to sell Sól merch at our shows but it is really just a continuation, I consider it a spiritual successor if that’s a good way of not answering your question.”

Whilst musing over the output of Sól Powers mentioned that “there are things that I love about everything we’ve put out” but narrowed down a favourite song as the final release of Sól, ‘Tomb of Giants’ which was adorned with the artwork of Alex CF. From there Sól ends and Unhallowed Earth emerges with debut release ‘Wharf’ which fits into the ecological discussion of climate change:

“Wharf originally was going to be a part of this album but then we decided we were going to take one of our songs and that was going to be a single. As a concept itself, if you think about climate change and the rising sea levels and if the worst projections are correct, a lot of cities are simply going to be underwater. So we’re kind of thinking about that, what does the coastline look like? If you’re looking for supplies or you’re looking for an answer maybe to why things failed the way they did so that we aren’t doomed to repeat the same mistakes maybe you would want to explore these types of ruins and so that’s what it is. I mean it’s a scavenger that is diving into a sunken city looking for any sort of meaning and finding none.“

And so the dawn of Unhallowed Earth begins with 11 and a half minutes of brooding, devastating post-metal due to be released on all streaming platforms on Wednesday 25 January.