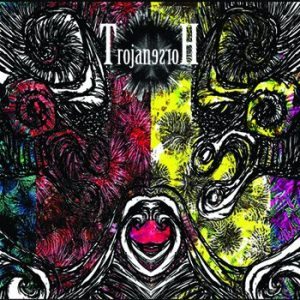 If I were to start a search for the next great English Prog rock band I think it’s fair to say that Salford would not naturally be the first place that I would look. The leafy streets of Cambridge maybe? Certainly the rolling hills of the Home Counties, surely? As it happens I could not be more wrong though, it seems Salford is indeed the place if Trojan Horse’s self titled debut album is anything to go by.

It’s always been a fascination to me that only the British make music like this. The Japanese love it, the Yanks sometimes make a half decent fist of it but it really is something quintessential to these shores that produces Prog of this type. Maybe it’s the tea.

Firmly set in the musical tradition that started with The Beatles and Syd Barrett era Floyd through early Genesis and all that followed in the golden age of Prog in the 70s this is a record that is not afraid to wear its influences on its sleeve but also adds something that is uniquely its own to the mix too.

Musically ambitious, brilliantly played and beautifully produced ‘Trojan Horse’ is obviously the product of a fervid, and sometimes deeply twisted, group imagination. It’s the little touches that really stand out; throughout the record spoken voices come and go, often buried so deep in the mix as to be almost subliminal, odd sounds trickle past in the background, things quite literally go bump in the night.

The issue I personally have with a lot of Prog music is that it is emotionally cold, the product of a group of extremely dextrous musicians wanting to show how extremely dextrous they are, but there is none of that here. These boys play it like they mean it and the passion shines through in the fact that every nuanced note, each time signature change and odd chord is there because they feel that’s where it should be for the integrity of the music not because they are showing off.

In Short, Trojan Horse have made a stunning record that is a worthy addition to the great cannon of English Prog rock. I can’t say fairer than that.

Out now for the ridiculously low price of £2 through Bandcamp