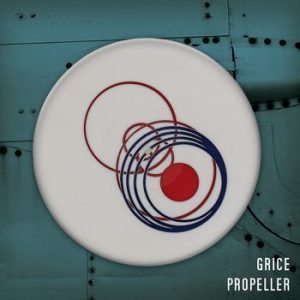 One of my favourite things about the creative process between a group of people in a band with various influences is the diversity of input to the overall sound. If the balance between everyone having the same direction and having a broad range of unique tastes is just right, you can all create an evocative new blend of sounds and genres and effectively find your niche.

GRICE has attained an extraordinary level of musical diversity, pooling influences as far apart as folk, soul, free jazz and pop, whilst somehow managing to maintain earthly alternative neo-folk rock all the way through the album. In my experience, to achieve this range often involves a collection of minds, so imagine my surprise on reading that GRICE is just one person!

This makes his debut album ‘Propeller’ all the more impressive. There is such a depth and level to the music that you manage to discover new nuances on each listen, which gives the album a lot of staying power. There is a slightly grainy quality which gives the entire album an almost vintage sound, which harks back to music from the 60’s and 70’s and gives it a ‘vinyl’ feel, while the sound carries through echoes from the acoustic music that I grew used to hearing during the 80’s.

The album opens with ‘Patiently’, using soft guitar and airy sounds, before rolling into piano and saxophone melodies, drawing on a rich variety of tones in a matter of seconds. Once GRICE‘s vocals kick in, you can already hear the wistfulness in his music.

As ‘Propeller’ continues, it envelopes you in layer upon layer of harmonies made up from a huge range of instruments, but with GRICE‘s voice crystal clear, sitting comfortably on top of the bed of music. All of the way through the album, there is such enormous depth to all of the music that it should be overwhelming, but it is delivered so delicately, yet assertively, that you’re able to make sense of it all. The production is immaculate; you can hear every single instrument and tone with absolute precision and still make out all of the lyrics that GRICE had evidently spent a lot of time crafting. The music is low level but intricate, as if he is baring the force of his soul but is having a hard time letting go.

I was delighted to find that the inlay holds all of the lyrics, a practice that I’ve always favoured ever since I used to stay up listening to ‘OK Computer’ whilst reading along. GRICE‘s words are linked together by an all-embracing sense of yearning. He openly and honestly displays his reactions to losing love, questioning loss, accepting it, forgiveness, and he draws parallels between himself and his parents. The lyrics offer a great dissection of his mentality when writing this album, as he shows his vulnerability and fragility after some heartbreaking experiences.

One detail I really enjoyed was the capitalisation of any song title mentioned in the lyrics, as well as the word ‘Love’. It gave added insight into GRICE‘s thoughts as you see ‘The Cage’ referenced in ‘Patiently’, as if the penultimate song ‘The Cage’ is an expansion of his feelings that allows you to be further immersed in his emotional state. Its music is noticeably more upbeat, almost as if he is clinging onto the hope of saving his love, but still singing about being afraid to love again. The focus on the word ‘Love’ strengthens the value that he holds against it, which is admittedly something that we can all relate to.

This album is all about the details, in both the lyrics and the music. The initial impression that every tune gives is that of melancholy and longing, but as GRICE stretches his sounds across a wide gamete of instruments, you can discover more influences drawn from 60’s folk, 80’s jazz, pop, Celtic, down tempo electronica and even Middle Eastern music in the vocal melodies. The only time the music rises to crescendo over the vocals is during the album’s title song, when GRICE quietly sings the word ‘surrender’ and the choir and instruments rise over the sound of his voice. It’s hard not to imagine that this is deliberate, given the attention shown to every aspect of the ‘Propeller’s creation, and it almost suggests that he finds it difficult to utter the message.

The firmly gentle delivery of the album made me feel the same was as when I first heard Porcupine Tree, or Opeth’s ‘Damnation’, simply by virtue of a soft lo-fi smokescreen attempting to hide a brilliant mélange of music from around the world, painstakingly reorganised and made new again. The cyclone of emotions that have been poured into ‘Propeller’ is made apparent by the way that the music and soul-wrenching lyrics interplay so beautifully. They always maintain a unique sound that grabs your attention immediately, but slowly unfold the effects in a way that could touch any one of us.

There are three main reasons I love the music I do. Either the music is unlike anything I’ve heard before, there is a lot of technical detail in it, or the lyrics are good. Occasionally, there comes along an album which encapsulates all three and balances them all to stimulate many parts of your brain and triggers an emotional response. After relentless listens to this album, I still find myself as intrigued, surprised and moved as I was on the first hearing. ‘Propeller’ is a bold debut work that allows you to accept your innermost fears and heartaches. In opening himself up, GRICE has given us an album that will continue to peel away your layers for a very long time.

Out now through Hungersleep Records.