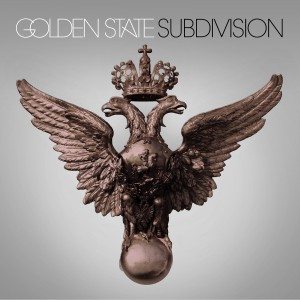 According to their website LA four-piece Golden State incorporate, “the ambition of prime Muse, the crunch of classic US rock and the vibrancy of Queens Of The Stone Age” into the making of their music. Based entirely on listening to their 4-track EP release Subdivision I can confirm that there is the crunch of classic US rock and a Queens Of The Stone Age vibrancy. However, I can’t comment on how reflective it is of their music on a whole. Three of these four tracks are taken from their debut album Division that was only released in the USA and of which I haven’t heard in its entirety.

There is a slight predicament with this particular style of rock music though and it goes as follows. Bands tend to morph into one another, with a similar sound and whilst this EP is an enjoyable listen, I’ve found it hard to decipher an individual personality for each track outside of the genre. This however, is not meant as criticism, it’s a compliment (perhaps it may seem as a back handed one but a compliment none the less). What makes this style so popular is just that; the fact there is little variation; fans can’t get enough of the ‘nod-your-head-along-to’ sweeping melodies, anthemic choruses and intense brooding vocals familiar to such music.

The EP opens with up-tempo ‘Rocket’ where Grundler’s throaty vocals croak “I’ll put a rocket in your mind” and Queens Of The Stone Age-esque guitar riffs reign dominant. ‘All Roads Lead Home’ is next up, a lovely little laid back, slowed down, powerful ballad about hope in finding your way back even when your world is thrown off kilter resembling slight echoes of U2. ‘Setting Sun’ has every aspect of a brilliant anthem rock song down to a tee and would be very popular with a mainstream audience.

Then there’s the bonus track “Bombs”, the only track not on the aforementioned debut album. You might want to skip the first 30 seconds which dare I say it, are a bit irritating, there’s this repetitive reverby guitar thing and echoed “end this war” harmonies going on which I don’t really know what to make of but wouldn’t have been out of place from Bono or at a Live Aid Concert. Focus is soon stolen by power ballad, bomb dropping drum beats, and the lyrics being represented through the urgency of Grundler’s vocals. Overall, Subdivision is strong enough that Golden State should build a very solid and deserving UK fan base.