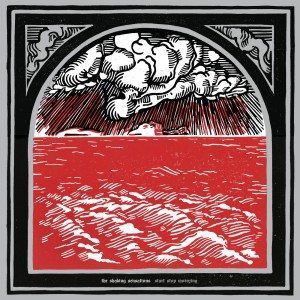 This is the second album from a band that I must confess, I know little about. A five-piece hailing from "windy Denmark", The Shaking Sensations have shared the stage with some 'glitteratti' of the post-rock genre and been around for 10 years. And I have never heard of them, or heard them. I hang my head in shame, for they are pretty good.

This album is produced by Matt Bayles (of Russian Circles & Mastodon fame), so with that kind of pedigree on board you'd expect it to be sonically impressive - and for the most part it is. What originally led me to put my hand up for this one was a synopsis that mentioned two drummers - in a five piece band I expected this to lead to some cavernous, apocalyptic drum sounds and a kick/snare combo that lifts the top of your head clean off. But for a lot of the album it's just not there, hinting in the background of what they could do as the guitar(s) chimes away in the foreground. And its two full kits as well - that much is apparent over the course of the album. So what happened? My guess is that it's two drum kits used as more than just percussion - this is two drum kits as instruments in their own right, contributing to the overall musicality of the album, not just a beat.

The album opens with 'Rocket Summer', a fairly standard 10+ minute epic to kick things off. And it's all there - question and answer drumming, loud-quiet-loud guitars, thudding bass and restrained song writing. It's not bad, but I would've liked a little more use of the drummers, and perhaps a non-standard key change or two. It is nice however to hear two drummers in your ears panned left/right, with two separate styles that lets you know that this IS two drummers, not one drummer multi-tracked. The kits sound different, are tuned a little different (I hope - Sander, back me up here!) and have different lines. The guitars contribute well too, with some nice build ups over the course of the track.

Next is 'We Ourselves Alone', which I'll be honest is more of the same. It's not bad, it's just not memorable. I actually feel really bad for writing this because I've listened to this album at least six times now, paying my dues in the hopes that I would hear something new to make me feel like I 'get it'. The guitars on this track more than any other reminded me of so many other bands I know and love, and while that gave me instant familiarity like a warm favourite jumper, I was a little disappointed. But hey - do you like Explosions In The Sky? The End Of The Ocean? These Hands? God Is An Astronaut? Then you will dig this. Guaranteed. And the 'marching band' snare towards the end really added to it for me.

'Anchors' is next up, and the best track in my opinion. I really enjoy the guitar/drum combo here, with an excellent feeling of space and melody. The guitars soar while the drums keep you interested, letting some of the snare hits fall off the back of the bar while the bass is just there, under you. And the ubiquitous 'wall of feedback' guitar I hear you ask? Why yes, it's there, in full post rock glory, pummelling your ears as the drums build up to a big, loud crescendo. It's the shortest song on the album and I think they nail it with this one. There's no wasted space - and I'd love to hear it live.

The next great track is 'Ravelin', which while sharing a lot in common with 'Anchors' seems to extrapolate upon the theory somewhat. Even the Xmas bells sound good, and that's difficult when you brain immediately goes to jingle bells mode! More Sigur Ros-inspired guitars in the upper end of the melodic range with some heavy reverb and delay, while snappy cymbals and punchy snares force you on from behind. And I love the key change - glorious. Arms in the air kind of stuff. If you've had a shite day at work, come home and crack a snifter of your favourite tipple and put this track on. When the final guitar chord comes in and takes a bite of your eardrums while the other serpentine guitar line and the powerful drumming finish the job, it's definitely a 'it’s all going to be ok' track. In fact - hell, this is the best track on the album.

I don't think it's accidental that my favourites on this album are the two shortest - the longer tracks just seem to meander a little for me. Don't get me wrong, I love long tracks - I repeatedly cop a ribbing off mates when my song choice is 16+ minutes long but here they seem to drag a little. But it's not the musicians at all. Or the production. Maybe this album is a stepping stone: a clear indicator of where they are going, and how they are going to get there. If so, I'm along for the ride. One thing - more drumming! More!