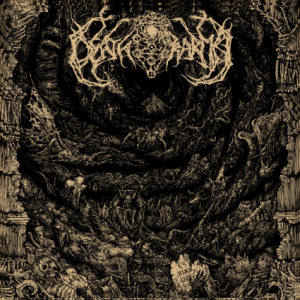 Death Karma are a two piece blackened death metal outfit from Czech Republic. A Life Not Worth Living is their debut EP and it proves to be an extreme introduction that’ll leave you with an echo on the inside. Comprised of members Tom Coroner (Cult of Fire, Lykathea Aflame) on drums and Infernal Vlad (Cult of Fire, Zio, Maniac Butcher) on vocals, guitars, and bass, the four songs on this EP will surely grab you by the throat and keep you interested with its varying speed changes and style.

'A Dead Oracle' opens the album with slow, drudging chord progressions that fill the room with a particular mood almost instantly. Without warning the pace speeds up, striking the system like a whip on skin. The vocals are ruthless, something you’d imagine hearing from a suffering, mortally injured soldier. The whole track sounds primitive and raw, perfect for those who love the brutality of death metal and the lamented guitar sounds produced in black metal.

'G.G. Funeral' opens with a pornographic audio clip that almost makes you check your Internet browser to see if some kind of rated X pop-up emerged while you were trying to listen to music. The track swiftly explodes out of nowhere into an extreme composition of vicious drumming, and heart attack inducing guitars, causing a shift in the original mood of the album. The death encrusted riffing carry this track on, leaving you wondering what else is in store.

The third track on the EP, 'Dark Omens' presents with a different vocal style, almost as if Infernal Vlad suddently takes the role of a Satan worshiping choir member, summoning his congregation. The track is heavy, like an unrelenting hammering to the face until it is beaten beyond recognition. The track could easily be background music to visuals of someone dying a vicious and violent death and leads perfect into the closure of the EP.

'DeathKaos' is the standout track on the album. It strikes like a thunderstorm, with crashes of lightning every few seconds. The vocals are strongest on this track, spewing devastation in the form of sound directly into the chest. The guitar sound is eerie, coupled with the howl of the vocals and the blaring of the drums, it strikes vehemently while blazing its path.

Although the EP as a whole isn’t over the top unique, it is definitely going to turn some heads. These guys have something with this release, fans of their previous work and new listeners who are in love with extreme metal should be eager to give it a listen. A Life Not Worth Living was released on Iron Bonehead Productions on May 10th, 2013.