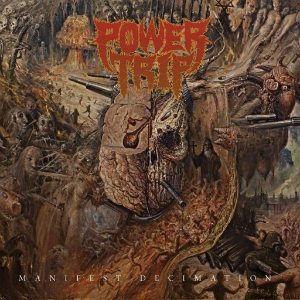 Just bow your heads. It's the polite thing to do in Texas, and this band deserves it. Go ahead and pay your respects. Make your amends. Your face is about to be ripped from your body.

Imagine being in the same room with the Mona Lisa. She's uncovered and breathing in the same air that you are. No glass surrounds her. Nothing separates you from her. You can get as close as you want; you can even touch the cracked painted surface if you so desire. Just you and a masterpiece sharing one single space. Now, imagine someone running in, dousing her with gasoline and setting her ablaze. The destruction of something beautiful happens right in front of your eyes. All you can do is stand and watch as chunks of her face fall to the floor, smoldering. The feeling you'd get is basically the feeling you get when listening to Manifest Decimation from Power Trip. An intense, punched in the gut feeling.

Our nation was once something grand and beautiful. A masterpiece of sorts. Untouched by industry, greed, or corruption. It belonged to a group of people who probably felt that same feeling of hopelessness; that of watching a masterpiece burn right in front of them. Seeing firsthand what the white man was capable of doing to something so sacred and pristine. The world as they knew it was decimated. All in the name of Westward expansion.

Manifest Decimation plays as a soundtrack to that kind of destruction; that killing of innocence and pillaging of beauty. Eight tracks of blind fury. And it's not just regurgitated thrash from the '80s, Power Trip have found their own sound; raw, fast, and in a league of its own. Songs like 'Conditioned To Death' and 'Drown' do bring to mind certain aspects of Nuclear Assault, but are presented as original takes on the thrash genre. From beginning to end, Manifest Decimation rips. There's really no eloquent way to say it. Get this record. Blow your mind. Bow your head.