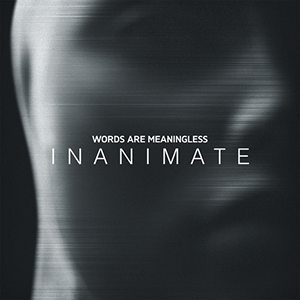 Sie Messenger is the electronic music talent behind California's Words are Meaningless (WAM). WAM's new EP Inanimate is a short five song offering clocking in at just over 16m. While the EP may be short, the five tracks are quite sufficient to get the WAM vibe. The electronic music is an evocative blend of dark ambient, piano and the occasional subtle industrial element. The music may seem rather somber and bleak upon the first listen. The instrumentation is rather spartan and the ambient elements feel directed toward contemplation, loneliness and melancholy.

After a few listens however, I found a reassuring comfort in the music. I can certainly imagine moods where Inanimate would be exactly what I would want to listen to. It would feel like a being covered in a comforting, warm musical blanket.

The simple arrangements on Inanimate possess a palpable and eloquent beauty. Without vocals, guitar, samples or drums, the piano notes are left alone to paint the auditory pictures. Sie allows the piano notes on Inanimate to breathe and they often feel exposed as they linger in the soundscape. The EP opens with 'One's Last' and a light ambient drone that is overcome by a lovely piano melody. As the track plays on the drone strikes and shimmers in the background ultimately submerging the notes by the end of the track. The mathematically savvy reader will recognize the next song title : '3.14159265'. Hey Pi! Pi is a rather somber mathematical constant and a stand-out track on 'Inanimate'. The simple synth drifts in like a docile fog then stark piano notes drop like woeful tears on a cold pillow. Toward the end of the track the piano notes are consumed by an industrial-ish static. Naturally the track ends at three minutes, fourteen seconds. The track exemplifies how simple piano notes can sound emotional and exalted.

I spent a lot of time googling song titles in an attempt to gain some insight into the songs on Inanimate. 'Pareidolia' "is a psychological phenomenon involving a vague and random stimulus (often an image or sound) being perceived as significant." Er... okay? I think an example better illustrates the meaning: 'common examples of pareidolia include seeing images of animals or faces in clouds and hearing hidden messages on records when played in reverse.' Ahhh...that! Be sure to add what message you hear in the comments below. What I heard in 'Pareidolia' was softer piano than '3.14159265' with a slightly subversive, sinister undertone. Strangely, later in the evening I spelled out 'W A M' with my mashed potatoes. Weird. 'Mechanical Mind' introduces a light beat paired with more gentle sprawling piano. The EP ends with the poignant and profound 'Lullaby For The Departed'. The piano keys fall delicately during this track with tension slipping from a subdued and strained synth wail. The 'Departed' also offers a minute of silence to close out the EP and pay respect.

When you are left wanting more from an EP then it has made the right impression. 'Inanimate' did just that. It is an enchanting, albeit short, journey through some lucid and moving electronic music. Sie Messenger strikes notes with effective confidence allowing the piano to become an impressive and expressive musical voice. I'm not sure you would want to play 'Inanimate' everyday. However, there will times you'll be drawn to hear from its soothing mellow heart. A recommended listen and I look forward to a full length release from Words are Meaningless. A wise man would grab the free EP from https://inanimate.wordsaremeaningless.com/. Enjoy.