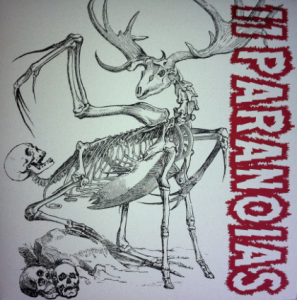 Out on July 8th through

11Paranoias is the coming together of band members from Ramesses (sadly no more) and Bong and consists of Adam Richardson (Ramesses) on bass and vocals, Mark Greening (Ramesses) on drums and Mike Vest (Bong) on guitars. When I heard these guys were going to record together I was fairly sure of the sound that they would be producing having listened to Ramesses and Bong in the past. So my reason for being excited at the prospect was spot on, well almost. There is still a flavor of Ramesses and Bong through out the album, so if you are a fan of either then you wont be disappointed but Superunnatural is much heavier than expected. It has deep psychedelic & spacey overtones all mixed together with some of Adam's best vocals I have heard for a while. Adam sounds like a tortured soul at times which works so well with the music. You really feel that he is trying to tell you something and not just spouting out lyrics.
'Deceiver of the Deep' is a heavy doom track that breaks into the first taster of the psychedelic, space sound that lingers in the background ready to pounce at any moment and is more evident in 'Ossuaries' and 'Reapers Ruin'. Get the headphones on and loss yourself to the full benefit of the vocals and experimental guitar that is playing behind the drums and heavy bassline. 'Inside Eusas Head' is a very trippy track, nice bassline and drumming sets you up for some awesome spacey guitar and demonic vocals. Where the first three tracks have a touch of Ramesses this is the track with a touch of Bong but what is so good about Superunnatural is that there are enough differences on all the tracks to make this a 11Paranoias album.
These are the LP tracks but on the CD there are four extra tracks which are all rehearsal versions.'Deceiver of the Deep' and 'Reapers Ruin' are much the same as the finished tracks. Whereas 'Eusas Ghost Project' with the same make up as 'Inside Eusas Head' is very different. It's the rawness of this recording that makes it one of the best tracks on the album. Big drum sounds from Mark makes this a very powerful song, it also come in at just under 12 minutes. If you have an equalizer then play around with the dials on this track and the last track 'Black Sun Loop' but don't loss to much of the rawness. That would be a sin.
Superunnatural has turned out to be heavier than expected with some even heavier basslines and sublime psychedelic spacey guitar from Mike, full of experimentation and a pleasure on the ears. You can buy the Vinyl or go for the CD either way you will own an excellent album. Really enjoyed listening to Superunatural, 4/5 headphones.