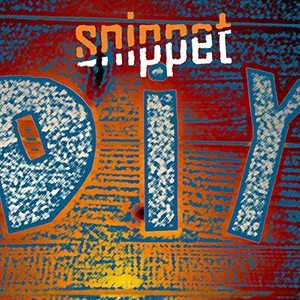 Johnno Casson, aka Snippet, has been around the block. A former member of late-90s Mo'Wax-ers Deep Joy and a bit of a chameleon, Casson's solo output has been diverse and pretty damn prolific; ranging from folk-infused alt pop via neo-soul to left-field electronica. With his new mini-album, DIY, he ties that diversity together and packages it in a handy 12-track collection.

Firstly, lets look at the title. DIY, to me always means music recorded, promoted and released by the artist, without any interference. Well, this is true in Casson's case. However, there are also elements on this album which suggest that DIY could be about making a home, a life and a family (Casson's kids contribute as much to the album as he does; on 'Comics' for instance, which is his son's strangely touching hymn to… er… comics). There are also some elements on the album which call to mind that other Essex resident, Ian Dury's arch ear for a humorous truth with a groove. And who himself released an album entitled Do It Yourself.

The found-sound interludes and contributions from his children form interlude-like bookends for Casson's rather artful electro-funk. Currently-playing track 'Absolutely Love' is a lushly laid-back groove, oddly punctuated by accordion and some Superstition-style clavinova. Opening track 'Let's Talk About Us' is luxurious, rolling, lolloping summer funk with squelchy bass, scratchy acoustic guitar and wry vocals. There are motifs from Motown-era soul, 70s jazz-funk and more recent exponents of similar styles, but there's also a poet's hand at work too. The lyrics and their delivery are down-to-earth Essex autobiographies: taking relationships, people and pop-culture as their themes.

After the frivolity and the optimistic beats, Casson throws a slight curve-ball with the melancholic 'Gone To Ground', a darkly beautiful cinematic ballad which highlights his propensity for diversity more than the other tracks on the album. Then 'Celebration' bounces around like a pissed clown on a trampoline. It's a celebration of the DIY music scene and, as such, is incredibly upbeat: 'See Us pushing through the fog; it's the rise of the underdog'. It stands as the fitting coda to the album, which indeed celebrates the act of making music but is also a diary of sorts; a diary that you can dance to.

There's much to recommend this album; it's well-crafted, soulful, inventive, touching and funny. There's not much more a man in a shed could need.