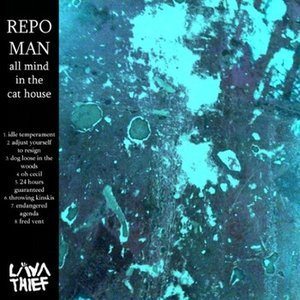 Out now via Lava Thief

This is not easy listening! If ever Coldplay-loving Guardian readers invade your house and assail your ears with talk of house prices and school places then put this on and watch them squirm and quickly leave. All Mind in the Cat House is far more than just an effective squeezed-middle-repellent, however. This is multi-faceted, sophisticated discordance which bristles with angst, contempt and flashes of aberrant beauty.

All Mind in the Cat House is the debut album from Bristol-based four piece Repo-Man who in addition to the standard vox/guitar/bass/drums troupe experiment with saxophone, violin and harmonica. The parallels with The Fall are obvious given Bojak's vocal style but there's an eclectic array of influences evident here, from The Fatima Mansions to Patti Smith,  early Gavin Friday to the Swell Maps, and Glenn Branca to John Cooper Clarke. Bojak has a great voice which peels with a corrosive swagger. His delivery is redolent of the angst of the frustrated and unrecognised auteur surrounded by apathy and the vaunting of banality.

While Bojak's vocals dominate, the music itself is far from just ballast; the guitars variously flail and tease providing each song with an underlying tension and sense of looming explosion. 'Oh Cecil' in particular throbs with menacing sonic intent which coheres with Bojak's demented exhortations to foment a tumultuous assault. Though they are infused with layers of distortion and seemingly erratic lapses into white noise, the songs are also deceptively catchy; 'Dog Loose in the Woods' in particular is immediately engaging. 'Throwing Kinskis' is perhaps the most captivating song on the album; mixing Bojak's social realism with ethereal, almost avant-garde abstraction, the song finally gives way to discordant abandon. The lyrics appear to rage against the herd-like mentality prevalent in popular culture and the alienating, degrading drudgery of work. "Banality abounds in every home" Bojak laments, and he decries ".. incessant as the daily trites, insatiable are our appetites".

There is a beauty in repetition. If done right the near mechanical bludgeoning of a refrain imbues songs with a trance-like quality and this is a strategy Repo-Man use to great effect. The occasional digressions into unusual solos - such as the saxophone on '24 Hours Guaranteed' and the harmonica on 'Endangered Agenda' - add a distinctive freshness to Repo-Man's sound. The vocal delivery is at times intentionally incomprehensible - especially on 'Endangered Agenda' - and acts like a challenge; there's something here, can you be bothered to find it?

Though initially often impenetrable - the intro to 'Fred Vent'  is especially eye-watering - All Mind in the Cat House is a thoughtful and inspiring album. It's caustic, aggressive and infused with an "we don't give a shit if you like this" hostility. One not for the faint hearted, this is a provocative stain on the silence.