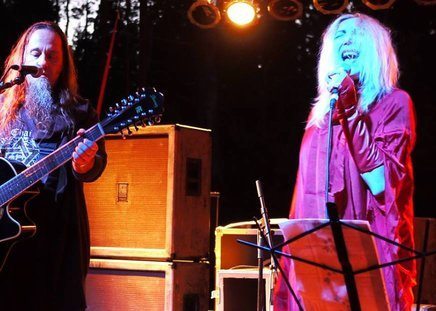 Ahead of her forthcoming tours of Australia and Europe (including a London show promoted by our buddies at Chaos Theory), Jarboe (formerly Michael Gira's key creative partner in Swans) took time out of her busy schedule to answer some quick questions from our features editor Benjamin Bland.

(((o))): So, you’re just about to go out on a pretty huge tour, including a few UK stops. What can you tell us about your plans for the shows with regard to performance style, setlist, etc?

We’re performing acoustic versions from my career via guitar and voices. There are songs from Swans and World of Skin (Skin in the UK originally) as well as my solo material - even unreleased songs.

(((o))): P. Emerson Williams is joining you on stage each night as guitarist. How did you start working with him?

I learned of his work through a mutual friend. I was impressed with what I heard.

(((o))): How wearing is it on your voice to have to play night after night for several weeks? Is that something that ever concerns you or something that has caused problems?

Sure, the voice changes with overuse. The way to handle this overuse is to be silent except for the show. After all, it is the audience experience that is most important for a show and for a tour.

(((o))): You’re a prolific collaborator as well as a prolific solo artist.  How do you go about deciding who to work with?

I would call it gut instinct. I ‘read’ people and sense their sincerity and motivation and ability to follow through in addition to skill level.

(((o))): Do you get a different sense of reward out of collaborative, as opposed to solo, work?

No, because I am even harder on myself and even more demanding and less easily satisfied.

(((o))): You did a Masters dissertation on Lord Byron. What is that you find particularly inspiring and interesting about his work?

I’d say the mood of romantic love and tortured emotions is what drew me in at that stage of my life.

(((o))): I’ve always got the impression that many of the most creative musicians are inspired largely by the non-musical. Would you say that applies to you?

Yes, very much so. I am an avid film buff, as well as a dedicated follower of extreme fashion and design, architecture, and all the visual arts. I’m also very interested in gourmet cuisine and wine!

(((o))): Having said that, I am interested to know if you listen to much new music at all. If so what sort of music have you found inspiring in recent times?

I am a massive Tricky fan and own everything he has released and listen to it all constantly.  To me, he is a pure genius.

(((o))): I believe you have been writing your memoirs. How is that progressing?

Yes, I have been doing so for years now. It is one main reason why I am going to the desert and Iceland in 2014 - for the isolation.

(((o))): I know you’ve reinvented a few Swans songs for your solo performances in the past, and the entire Swans discography has a feel of reinvention in it for me. Do you think reinventing your art, whether stylistically or purely sonically, is key to creating continually interesting music?

As I understand the vocabulary in the work with which I absorbed and sculpted, it is natural to express an essence of that creation, that child. As or creating itself, I have done numerous albums with a different sensibility from Swans and in fact am doing a modern jazz/blues album in 2014.

(((o))): I’m particularly curious about the period in the early nineties when White Light... and Love of Life came out. The former especially is one of my favourite Swans records, but it seems from various statements / lack of reissues / etc that Michael isn’t especially keen on that period of the band anymore! Do you agree with me when I say that period of the band has perhaps been overlooked? Why do you think that is?

White Light from the Mouth of Infinity is brilliant. I am proud of both of those albums. They shine. The reissue that Michael named Various Failures is the opposite of that title. It is magnificent. The most highly sought after album of all the Swans albums to date is the original issue of White Light from the Mouth of Infinity. I am also very proud of my keyboard work on that album.

(((o))): I know it must be tricky to think about, but I cannot help but wonder which records, or individual songs, have been most successful at translating your creative vision over the years?

The entire Anhedoniac album is my private and personal masterpiece.