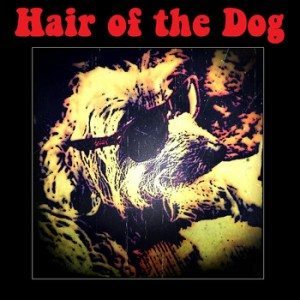 Hair Of The Dog

It's not often I get the chance to review a local band but I now have the pleasure of introducing you to Hair Of The Dog. They are an Edinburgh rock band consisting of brothers Adam Holt (guitar and vocals) and Jon Holt (drums) with Ian Thomson (bass). They have released a seven track self-tilted album, which is full of intelligently written songs that ooze pure rock born of the 70's with just the right mix of modern stoner riffs, kind of Queens of the Stone Age meets Deep purple but the sound they have created is very much their own. I’m not sure if the dog on the cover is theirs though but he looks cool with the shades on recovering from the night before.

This is an album that can be fast and furious, heavy and pounding or smooth and melodic, very riff oriented and after listening to it a few times I really felt part of it. I could have had this in my collection for years and like an old friend it would always come back to visit. In fact during some of the guitar solos my face was probably a scary distorted mess. Well it is not easy trying to emulate a guitar solo with your face but I was feeling it.

The first two tracks 'The Game' and '1000 Watts' have that mix of early rock and stoner rock, very catchy riffs and pounding bass. Both tracks also have great interludes especially 'The Game' but 'Empty as the Wind' is when the party really starts. This is an amazing track, as it’s so well written. It has all the elements of a fantastic rock song that would fit into any decade. It’s fast and heavy with melodic vocals and excellent drumming all building up to a rock crescendo.

'That Night' brings you back to the 2000's with tempo but there is still an old school solo about a third of the way in. Nothing is just put in to fill space on this album, it all works well together. 'Strangers in the Darkness' is a vocal lesson for any young rock singers out there. You don't have to scream all the time to get some emotion out. This is another intelligent song this that I could play over and over. 'Concrete Waves' is the last of the rock tracks and has the most 70's sounding riff on the album. It’s nicely put together with a classic ending.

Adam’s vocals really put me at ease, what a great voice, especially on 'Ships in the Night' the smoothest track on the album. I loved this track; it's a pure delight to listen to and could easily have been written by any of the great rock bands of old. It also seems he can play the guitar, well when I say he can play the guitar I mean he owns that guitar. What an array of riffs and solos, all complimented by the equally talented Jon and Ian on drums and bass making this one tight band that somebody has to jump on before they miss the chance. Believe me they are going to go far.

I'm looking forward to the next album. I'm also fairly sure there is a keyboard in there somewhere on 'Ships in the Night', which is a nice touch.

You can now pre-order the vinyl over at Kozmik Artifactz.