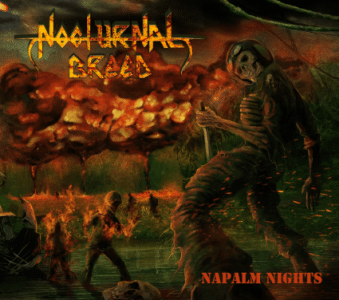 Napalm Nights has been seven years in the making. The follow-up to Nocturnal Breed’s Fields of Rot, a critical darling at the time (2007), and a highly anticipated album as well. It is interesting to me when a band takes so long to release a new album. I get that the album making process as well as touring demands etc… can take a toll on a band and a rest is usually required. But a seven year rest is odd even for the hardest working bands in the business. The real question at hand is was the seven year hiatus worth it and have Nocturnal Breed kept the magic that followed their previous release? The answer: not really.

Nocturnal Breed have released an ambitious album and they should be given credit for that. But at 64 minutes it is a trying album to get all of the way through and to be quite honest the album itself is pretty boring. Sure there are some highlights in the songs 'The Devil Swept the Ruins', 'Cursed Beyond Recognition', and 'Dragging The Priests', but for the most part the rest of the album just trudges along and is a challenge to get through. I have had this album for review for a while and I have listened to it several times over the past few months but no matter how many times I listened to it the only thing that stood out to me was that most of the songs on this album are boring and repetitive with no real uniqueness to them. I get that when you are working in a genre like thrash the use of the fast chugging rhythm and riffs of the genre are necessary however; a band does have the option to take some liberties and maybe create a bit of variance in what the music is doing. Listening to chug, chug, chug, chug for 64 minutes can become pretty draining on a listener.

A while ago I wrote on my own blog that that I worried that metal music has used up all of the unique riffs over the last 30 years and there was nothing unique for bands to try anymore. That no matter how much a band tries to differentiate from one another they all wind up recycling the same riffs over and over again. For the most part I have been proven wrong. There are plenty of unique bands out there bringing stirring and original music but Nocturnal Breed is not one of them, at least not on this album. As I listened I found that with each song I listened to I felt I had heard it before. Hell, the song 'Under the Whip' has a riff running through it that is straight out of Motley Crue’s 'Looks that Kill'. When this song started I started singing “Now listen up/She's razor sharp/If she don't get her way/She'll slice you apart” I am pretty sure that this association should NEVER happen.

With a lack of highlights and solid songs on this album it is tough for me to recommend you spend your hard earned money on Napalm Nights. With the exception of one or two songs this album is a chore to get through and the payoff isn’t significant enough to waste that time. I wish I could have formed a different opinion but the earworm you get from listening to this album shouldn’t be of another band's song.