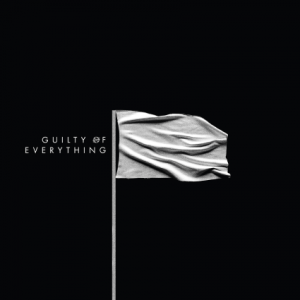 As far as concepts go, nothingness is a big one. Our world is so inescapably defined by stuff. Stuff you can see and experience. Stuff you can hear. Right out of the gate, then, the band Nothing has set up a pretty big challenge. It’s the kind of name that demands to be placed on something iconic. With Guilty of Everything, Nothing uses aesthetics to a degree that seems to hint that they’re going in a direction that pays off such big, bold moves.

Really, iconic is the key word here. With the single white flag on the album cover, calling to mind Wire’s quintessential Pink Flag, Nothing sets up an album that often references moments and bands in music history that definitely drum up a lot of hefty comparisons. It’s very easy within the first two tracks to think of Guilty of Everything as a throwback to the giants of 90s shoegaze. The heavy walls of riffs are tempered by dreamy, shimmering guitar textures and even in the midst of the loudest moments the vocals are astonishingly restrained and gentle. Songs like 'Dig' check a lot of boxes on the shoegaze/dream pop list of trademarks, but there is also an undeniably modern sound apparent in the track’s restless energy. While the band keeps the rhythm at mid-tempo, there is still a sort of whiplash effect in how it slams back and forth between angular clean tone post-punk passages and back into the heavy wash of its beefier moments. This is a band that can ride out a groove, but seems to lose interest at a point and often mixes it up in a way that is out of step with the tropes of earlier forbears of feedback-laden, distorted pop songs.

Nothing is definitely at their most engaging in tracks that buck these tropes altogether. The track 'Get Well' creates a welcome mid-album tone shift as it launches through the band’s most hook-reliant material. The song is anthemic and revels in its catchiness, standing out in an album that often relies on texture and atmosphere. There is still a tension between the over-driven guitars and caveman drum beat which are matched with Domenic Palermo’s vocals that continue to never rise above a near-whisper. This seems to highlight that Nothing is a band that is not afraid to make decisions, and those decisions create a unified aesthetic throughout the album that often engages on a cerebral level as well - sometimes more so than on an emotional one.

When the band seems in danger of perhaps thinking too much, though, the track 'B&E' bursts out from behind the curtain as the band at its least restrained. The song still maintains the mid-tempo pace and mournful melodies that keep it from feeling out of place, but it also sounds like the band is playing from a more unhinged, emotional place. The song, different from all the others, has a progression into the most menacing facet of Nothing’s sound - a true moment of strength and chaos that feels like a song that was not so much written by the band as it was discovered. It is the most exciting moment of the album, and it feels like a payoff earned by the song being couched in a collection of songs that often flirt with similar levels of energy but consciously back away at just the right moment. In this way, the music seems to coax and tease toward a satisfying, crashing-down conclusion.

The design of it all is quite visible throughout, as if you can tell where Nothing has edited themselves. A flash here and there where you expect the shriek of a guitar might instead be replaced with a sudden dive into gentle arpeggios. The voice continually refuses to be raised in moments when you want to hear it howl. It creates an environment that allows for movement and only shows the band’s full capabilities in sparse moments. It remains to be seen if the band will one day follow up with something equally calculated, or if the next time we hear Nothing we will hear a band that is confident to follow their music wherever it takes them.