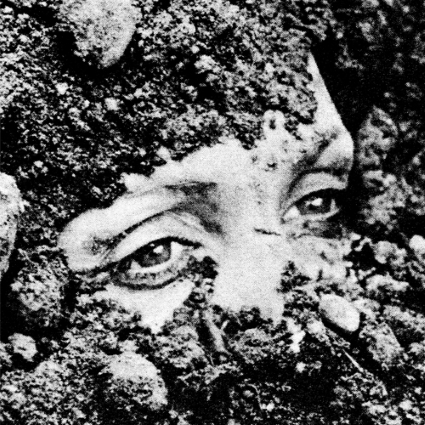 Some collaborations are simply inevitable. When it comes to the work Thou and The Body have put into their collaborative mini-LP Released From Love, their pairing is serendipitous. The LP, three original songs and one cover, is a relatively brief immersion into the dark worlds these bands inhabit, but it is no less affecting and precise in its execution.

Released From Love wastes no time on airy introductions- distortion wails as heavy-as-fuck drums tumble in, and then those monstrous, chugging guitars that both these groups are known for arrive. ‘The Wheel Weaves as the Wheel Mills’ chugs through its almost six minute length with ease. Bryan Funck, vocalist for Thou, takes center stage for vocals throughout most of the EP, and his grisly screams are perfectly contrasted by Chip King’s bone chilling wails.

King’s utterly unique vocals can be challenging at times on The Body’s own work, but their role on Released From Love is decisive. He provides the vocals for the last track, ‘Coward’, a Vic Chestnutt cover. Thou’s experience with covers is extensive, and this collaboration is perfectly suited for ‘Coward’. Vic Chestnutt’s original cut is haunting enough- The Body and Thou have managed to make it even more harrowing. The cover closely follows the original song, with that bone-chilling guitar riff getting the doom treatment it deserves. Vic Chestnutt would surely be proud.

Both Thou and The Body have a reputation for relentlessly releasing new material and both bands have new albums out in 2014, but that did not stop their working together. Their individual albums are both fantastic, but the middle ground between their two extreme sounds is idealized on Released From Love. Where both bands seem to allow their songs to explore uncharted territories of the doom and sludge genres, Released From Love finds the bands gravitating more towards center.

This admittedly vague concept is exemplified on the third track, ‘In Meetings Hearts Beat Closer’. Pounding drums pulsate throughout the song while apocalyptic guitars ring out in the cacophony. The song roils through a catchy first verse into sludgy guitars, then finally onto a wall of noise punctuated by pounding drums and Funck’s screams. It is the most varied track on the album, and is evidence of just how serendipitous this collaboration really is. Released From Love is not a watered down version of either band- rather, it is more of a fantastic concentration of both groups’ sound.

What is surprisingly lacking on the LP are the electronic elements that The Body have incorporated in their recent work, especially the fantastic I Shall Die Here, on which they collaborated with The Haxan Cloak’s Bobby Krlic. Regardless, the listener must trust that bands the likes of The Body and Thou must be doing what is right by them, and Released From Love remains a momentous, harrowing piece of work.

Luckily, the collaboration will be performing a string of shows in June, including at Gilead Fest in Wisconsin. Released From Love is available for purchase now from Vinyl Rites, and will be released only on vinyl.