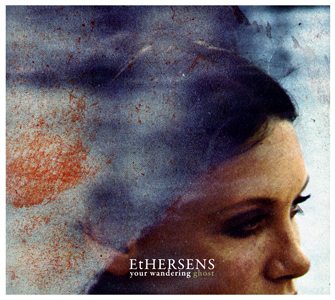 Out Now via Bandcamp

My first review for this site was the dark and menacing Eryn Non Dae. And a year later I’m listening to EtHERSENS, which was founded by END’s bass player Mickaël André (although in this band he demonstrates his admirable guitar playing chops). That’s pretty much where the similarities end. EtHERSENS is dark and menacing but display more melody and more accessibility on this, their second album, Your Wandering Ghost.

Ominous chords and notes herald the start of an epic musical journey as ‘Two For One Mind’ snakes and slides out of the speakers like a fog. Vocal harmonies entice you into the fog until, almost 3 and a half minutes in; a wall of guitars hits you. It’s a brave, adventurous start to the album, the band displaying a deft use of dynamics and employing vocals that you can sing along to. ‘Same Goodbye’ revolves around the monotonous yet engaging drum part from Stéphane Nestiri. It’s bleak and barren filling you with a sense of emptiness. ‘This Is Where You And I Part Ways’ is a more straight-ahead rock tune that could easily garner radio airplay, singer Laurent Mora conveying swathes of emotion is his delivery. ‘Livin’ Memory’ follows in much the same rock vein but has the catchiest riff on the album. Shades of Deftones on this track but that is no bad thing!

After the driving force of those two tracks, EtHERSENS drag us back into murky depths with ‘Mourning Light’. With a nod to the structural qualities of Tool, we wander our way through spikes of jagged melody and slabs of heaviness with singer Mora as our only guide and provider of light. ‘Reflect’ begins with a nod to the heavier end of the musical spectrum with a bit of thrash riffing and blast beats, the band wisely realising that this part of the song is most effective when deployed sporadically, alternating between this adrenaline rush and a much slower drone-y sequence. One of my favourite moments on the album can be found in the main verse riff in ‘Waking Disorder’ when the guitars become staccato machine guns whilst the drums punch and jab underneath. It’s a wonderfully aggressive yet totally restrained piece of metal. Midway through the track the aggression dissolves in a dreamily musical section that allows the band to build back up to a higher peak. Album closer ‘To Live Is To Forget’ a prog gem filled with riffs, tribal drum patterns, passion-strewn vocals, melody, atmosphere and quirkiness. It’s a brilliant summation of everything that has come before it and a brilliant track to end on.

EtHERSENS have created a real gem of an album here. There are touches of Deftones, Tool, Alice In Chains and even Katatonia in parts. If you like your music 4 minutes long with guitar solos then this is not the album for you. This is a sprawling, consuming album its 8 songs reaching to almost an hour running time. For many the word ‘prog’ is anathema, a mark of excessive and density. But used here, it’s more a symbol of pride. This is a progressive album of a high calibre. I can only hope that it doesn't take the band another 5 years to release their next album.