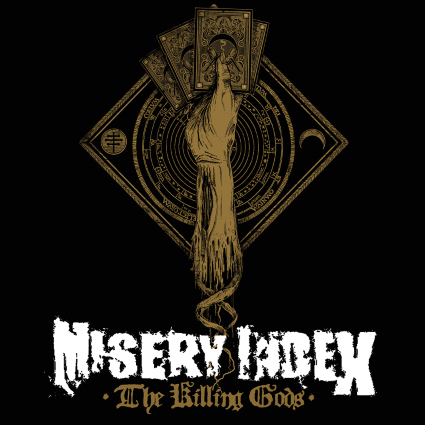 Although the word “brutal” may be somewhat exhausted in reference to all matter of extreme metal bands, there are times when the descriptor is the only one that will do. Misery Index have made it a matter of consistency to release album after album of brutal, genre defining death metal and grindcore. On their new album, The Killing Gods, the band releases another monster record that doubles as a clinic on how to write and perform equally complex and heavy death metal.

While it appears simple enough for other death metal bands to release albums that more or less sound exactly like one another, Misery Index opts to dig deeper into the genre, as well as their own sound. There is no loss of the razor sharp rusted edge of their earlier material and the growing complexity of their newer releases. Among all this, Misery Index manage to sound just as pissed off as ever- spouting lyrical blasphemy and choice words about those responsible for possibly bringing the age of man to an end.

The Killing Gods opens with the five-part production, ‘Faust’. After a gut punch and resonating guitar lead the listener in on ‘Urfaust’, Misery Index waste no time with the second track, ‘The Calling’. The band has a revamped lineup, with Darin Morris taking over for Sparky Voyles on guitar. What ever lineup shifts that occurred were quickly ironed out, as ‘The Calling’ is a heavy dose of all things Misery Index. The track effortlessly moves in fits and starts through its brief but heavy three and a half minute length, combining skillful guitar riffage with Adam Jarvis’ diverse, perfectly executed drumming.

After a transitional track and ear shattering transition, ‘Conjuring the Cull’ arrives, and it has “legendary deathgrind track” written all over it. No, really, the song is a thing of filthy, brutal beauty. Misery Index make the idea of verses and choruses in deathgrind work very well, and even manage to fit some catchy vocal progressions into the mix. Everything is on point on ‘Conjuring the Cull’. It is the track you should tell your friends to listen to if they haven’t heard of Misery Index. Just make sure they’re still alive after listening to it.

The album’s official tracklist closes with ‘Heretics’. It is a fitting conclusion to The Killing Gods, as it represents Misery Index fully unhinged. There doesn’t appear to have been any concessions made on ‘Heretics’ - the song is some sort of newfangled blend of thrash metal, deathgrind and whatever else Misery Index decided to throw in. There’s a part in a film called Pan’s Labyrinth (2006) where a character smashes another character’s face in with a bottle. ‘Heretics’ sounds like how that must have felt.

2014 is shaping up to the year of death metal. With Behemoth’s leviathan The Satanist and now Misery Index’s The Killing Gods, the music world has, simply put, become more brutal. Misery Index push the edges of the metal genre on The Killing Gods and the dividends are more than rewarding. The album is like a bottle to the face, minus the glass and all that bloody clean up.