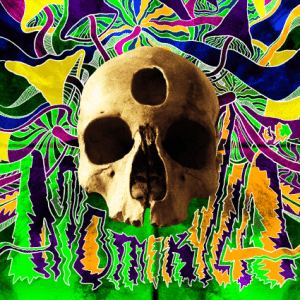 Atomikylä is a four piece band from Finland consisting of J. Vanhanen (guitar/vocals), T Hietamäki (bass) from Oranssi Pazuzu and J.Rämänen (drums) and V. Ajomo (guitar/vocals) from Dark Buddha Rising. They have released through Future Lunch a debut album called Erkale, which has a lot of elements from the above bands but really does stand out alone. The five tracks on Erkale are a powerful example of the experimental psych music that Finland is producing at the very highest level with all the band members having a musical pedigree that is worth taking notice of.

Erkale is full of heavy and pounding psych/drone guitar with vocals that will probe deep into your mind, bringing with it dark horror, but even in the depths of chaos there are periods of tranquilly. There are more than enough musical ingredients to bring alive that neglected bong, so fire it up and enjoy.

The album starts with ‘Alkuaineet’ which has the bass as its heartbeat, pounding out slow heavy drone to some trippy psych guitar and military style drumming. You feel as if the track is building up to a crescendo but instead a third of the way  through you are left with just the heartbeat bass and drums before the accompanying guitar plays a smooth haunting tune. The tranquil atmosphere is even more enhanced with jingling space effects before things start to speed and you are hit with more guitar layering. This comes at you from all directions and some demonic vocals that will take you to a whole new level. ‘Alkuaineet’ really is an immense track that you will wish could go on and on and because of the seamless merge with ‘Erkale’ you will think is has.

‘Erkale’ will have you drifting around in deep space, ship engines echo around you adding to the overall feeling of depth in darkness. Space station conversations, heavy bass and some excellent guitar riffs makes this one out there space track. ‘Ihmiskallo’ is much heavier than the last two tracks and possesses a slight doom feel with its heavy riffs. Demonic vocals and painful screams add to the overall feel of this track, even the organ gives it a Hammer house of horror vibe. Trudging intense doom awaits you.

‘Who Goes There?’ turned out to be a bit of a surprise. I didn’t expect to hear jazz style guitar and cymbal tapping drumming being played over some nice flowing psych music straight from the dingy slide show music venues of the late sixties. You really need to let yourself go to get the whole experimental experience of ‘Who Goes There?’. It’s a very accomplished and versatile piece of music showing another side of Atomikylä. ‘Musta Kulta’ is the last track and the most drone one, for at least three minutes, then chaos reigns again to delight your ears or make them bleed. The demon is back with vengeance.