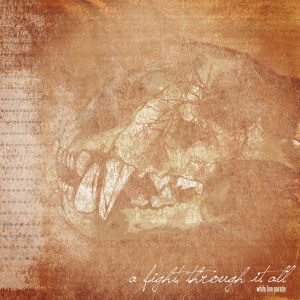 White Lion Parade’s latest EP is a perfectly packaged post/prog rock record. This fiercely energetic Bristolian trio has somehow mastered the balance of raw screamo vocals with ambient instrumental work, making A Fight, Through It All a feat in today’s world where the relationship between noise and melodics is a complicated one.

It’s also an achievement that for such an early EP, the album manages to showcase the band’s full range of technical skill while also having a clear sense of purpose and direction. With little more than a year since WLP’s last album “The Valley” – which wasn’t an easy EP to follow given the promise it already showed –  “A Fight, Through It All” surprisingly displays a lot more emotional depth and musical maturity. WLP has taken its atmospheric sound much further, using intense vocals and heavy noise to define the record’s ebbs and flows rather than just littering its use throughout.

And it truly ebbs and flows beautifully. You can feel that the band wants to tell you a distinct story as they take you through their five new songs. We open with ‘Preface (It Will Be Upon Us)’ – a gorgeous post-rock tapestry of ambient guitars serving as a backdrop to a reading of the opening lines of H.G. Wells’ War of the Worlds. We flow seamlessly onto ‘Sirens Scream’ – which begins with light gentle vocals accompanied by throbbing guitars, and ending on a gruff, screamo vocal climax. The 44-second long ‘A Constant Reminder’ then serves as a perfectly placed amuse-bouche for the aural appetite – drifting, mysterious and moody – before throwing us into ‘Change’, the album’s penultimate track. It starts with another segment from War of the Worlds, launching into heavy guitars and a driving drumline topped off with atmospheric vocals. We end our journey with ‘Through Everything’ – which gives us famed motivational speaker Eric Thomas passionately delivering his often-quoted success speech, carried by effortless guitar work interchanging between thick steady pounding and light melodic riffs.

It’s incredible how the theme of heavy noise waves repeatedly breaking through lighter melodic tones encapsulates the sentiment of A Fight, Through It All. Once the record’s finished, you realise it’s not just an auditory experience that the band has taken you on – it’s a very clever album that stimulates your mind, a rare treat in today’s crowded post/prog scene. But despite being quite thoughtful and heavy, there’s still a sense of fun and hope to WLP’s music, and the album’s rawness makes you feel as though you get to know the band personally. I’m certainly rooting for WLP and can’t wait to see what they write next.