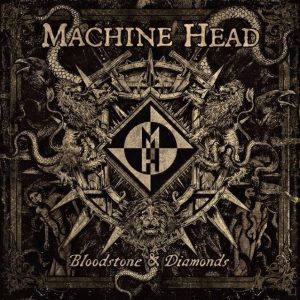 It?s not often you get to say a band has found it?s form more than once in their career, but with Machine Head‘s eighth studio release Bloodstones & Diamonds, the Bay area metal giants have done just that. Having been a “headcase” since their debut release Burn My Eyes it?s with almost a strange sense of pride that I can say this. As if your big brother did something pretty bloody awesome. And without a doubt, Bloodstones & Diamonds is pretty bloody awesome!! To say that Machine Head have gone from strength to strength which each release since the mighty Through the Ashes of Empires is really an understatement. They found their form with that epic release, firmly cementing them as heavy metal stalwarts. And after another two equally epic releases, the departure of a founding member, touring, recruiting a new bass player, Rob Flynn and cohorts have once again found their form.

Bloodstones & Diamonds is their finest release to date. In this reviewer’s eyes, surpassing the mind blowing Through the Ashes of Empires and The Blackening and as equally swift a punch in the face as their debut Burn My Eyes. Their recent upheaval of members and signing to Nuclear Blast has proven more than beneficial to a band who really needed prove nothing to anyone. But the new production quality, the improved harmonies and the more exploratory style of song writing has proven that Machine Head are THE mainstream metal band by which all standards should be set.

The subtle extras in each tune, be it strings or choir are so effectively executed. None more so than album opener ‘Now We Die’. This is the literal calm before the storm as the strings lead you into Flynn?s guttural war cry setting the pace for the rest of the album. The sweeping chorus of ‘Ghosts Will Haunt My Bones’ perfectly showcase newcomer Jared MacEachern?s harmonies whilst letting him establish his own bass sound. This just goes to show that Machine Head is not a thrash metal dictatorship. Flynn has let Jared simply be Jared – just in an MH setting. And the pairing is perfect. It in no way dismisses what has been sewn before but it moves ahead with a new sound that is just as powerful yet totally unique to the new MH. ‘Night of Long Knives’ is classic MH and is set to be a fist pumping crowd destroyer.

Probably the most surprising is the doom inspired ‘Beneath the Silt’. Downtuned, fat as fuck, riff laden and sung to perfection. Flynn?s vocals shine on this track. And Demmel?s lead guitar abilities are executed in flawless style. McClain?s drumming is nothing short of thrash metal perfection and with a new bass player in the pocket, this rhythm section is set to be colossal.

Machine Head have shown no remorse with this release, sweeping the ne?er-sayers aside with twelve of their most awesome, heavy as hell tunes to date. They show no signs of slowing down yet, which makes this Headcase a happy man.