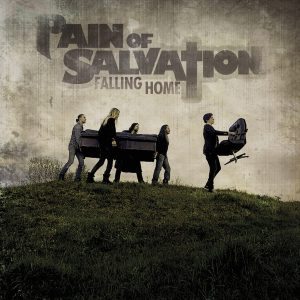 Released on November 10, 2014 via InsideOut Music

Pain of Salvation is one of those bands that tend to go the retro way quite often. Situated somewhere between metal, prog and hard rock, the band surprises this time and tries to get the best out of acoustic or semi-acoustic songs with the new album Falling Home. This concept might sound more or less interesting at first, still, the album’s opening song ‘Stress’ is so downright pathetic that “less interesting” seems to be the correct foreboding. There is a Led Zeppelin cue right at the beginning and these hints at classic hard rock bands and songs sadly are a prominent feature on the album. The pseudo-jazz and acoustic twang on the album as well as the seemingly random mixing of all kinds of genres really don’t make it easy to take the band and especially its leader Daniel Gildenlöw seriously.

But the way the band goes ahead in terms of performance isn’t the best either: the vocals on this album give the music an uncertain feeling of being yet another one of Bon Jovi’s endless attempts of reinventing middle-of-the-road rock. This music isn’t even close to generally cheesy AOR than it rather seems to be a nearly 50-minute-long variation of the intro of Boston’s ‘More Than A Feeling’. The album is such an ill-fated affair of “doing it differently” one wishes the band had rather played it safe instead.

The overall sound of the band is at the same low level: the acoustic guitars sound even “plonkier” than the Shadows (just for the record: a great band!) ever did, the drums are as usual as they can be and the e-piano – as well as the other keyboards – remains nothing but a dull feature. Although some of the instrumental passages are decent nevertheless, the album’s clear mix doesn’t focus on them properly and creates some kind of uninspired rehearsal atmosphere instead.

The musicians don’t seem to know where they want to go on this album. A cheesy ballad here (‘Perfect Day’), many mindless pop songs there (seemingly every second song on the album), but in the end you’d wish Falling Home was just a collection of demos or outtakes. Sadly it is an album of mostly awkward and sometimes embarrassing songs probably only the band’s fans will like.