(((O))) : Primus & the Chocolate Factory with the Fungi Ensemble 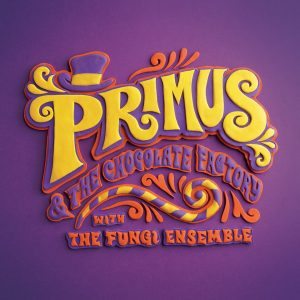 Les Claypool saw the 1971 Charlie and the Chocolate Factory when he was seven years old. His child brain grabbed onto the trippy, dark weirdness of the movie and helped to form Claypool into what he is today. He loved the movie so much that he played the full soundtrack at a New Year’s Eve show in Oakland, CA, last year. Not content to re-create the bizarre scenery for those attending the show, Claypool and company have released Primus and the Chocolate Factory, a studio recording of that live set.

Primus and the Chocolate Factory fits in all the ways you think it should. Les Claypool is joined by the definitive Primus lineup, with Larry LaLonde playing guitar and Tim Alexander on drums. An added piece to the musical ensemble is The Fungi Ensemble, consisting of Sam Bass on the cello and Mike Dillon playing percussion. It all adds up to a grown-up version of Charlie and the Chocolate Factory that will melt your mind. This isn’t a straight cover album, though. Primus makes it their own. Primus presents the movie score in what feels like a fever dream. The music is a mix of classic Primus from the era of Pork Soda and more recent Claypool solo recordings. Combined with the words and basic feel of the original movie score, Primus and the Chocolate Factory leaves you feeling weird and entirely wonderful. It’s fantastic and horrifying.

The songs walk us through the movie in the same order that they’re presented in the film. ‘Hello Wonkites’ gets the ball rolling. ‘Candy Man’ gives the original song a dark feel, pulling us out of the candy store that Charlie visits and into the alley behind the store where a hooded figure offers wares that are decidedly darker. ‘Cheer Up Charlie’ and ‘Golden Ticket’ present a more desiccated version of Charlie’s family, as his mother and Grandpa Joe set the stage for the next act. ‘Golden Ticket’ has a really fun bass lead and one of the catchiest choruses on the album.

We move from here into the factory of Willy Wonka. Les plays the short piece from Mozart’s ‘Marriage of Figaro Overture’ that Mrs. Teevee mistakenly identifies as Rachmaninoff in the 1971 film. Primus has some fun with this and renames it ‘Lermaninoff’. ‘Pure Imagination’ leads us into the wondrous, dangerous world of Wonka. All of the pieces are here. The LSD boat ride from the movie becomes the ‘Semi-Wondrous Boat Ride’. Each of the four Oompa Loompa overtures get repetitive, but ‘I Want It Now’ is as more ridiculous and bratty than the original. ‘Wonkmobile’ is just strange. ‘Farewell Wonkites’ is the forlorn and creepy ending that the movie should have had. In fact, this album is the remake that Tim Burton was trying to make in 2005.

You’re not going to be putting on Primus and the Chocolate Factory when you want to jam out to some Primus. You probably won’t be listening to it more than once in a blue moon. It is, however, a fantastical ride that fits in the Primus catalogue nicely. It’s also one of the greatest tributes to one of the greatest, weirdest movies ever made.