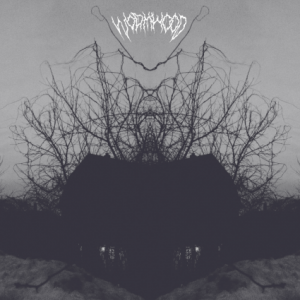 Wormwood is a two piece sludge unit hailing out of Boston, MA. And while sludge/doom/stoner is lately all the rage in the metal scene, Wormwood has an approach that pushes forward an old school attitude while feeling fresh. The two piece, double Chris attack (Chris Bevilacqua and Chris Pupecki, respectively, both of whom have Doomriders credits to their name) have cut their first EP on Magic Bullet Records and Patac Records. A heavy beast that has as much groove as it does darkness to offer.

What Wormwood have here is a piece that is a different slice of sludge. It doesn’t trudge along so slowly that it gives the impression of a cold, sweltering stalk, but instead comes across as something that has more oomph. The first track ‘Hollow Black Eyes’ is at once sludge and at another time a puncher. The piece comes in stomping, heavy and hard. The distorted vocals of Pupecki are fuzzy but fully distinguishable.

Though Wormwood aren’t without the droning creep that the genre has become known for. Wormwood carry a plenty heavy sound. They often apt for stomping ahead as opposed to going into a full blast, though the band feels like they’re going to crack at any moment much of the time. ‘I’d Rather Die’ has a constant fever behind it that sounds like it could boil over at any moment and set off into a flurry of blast beats. Wormwood opts to control itself instead with a bloodshot gaze. ‘Indoctrination’ runs down a similar path, slowly pushing a dark and grimy melody that’s aptly named. The piece is much like an anthem for the band itself.

What makes Wormwood such a stand out is the Celtic Frost influence that they strongly carry. Sure there’s plenty of sludge and heavy throughout but pieces like ‘White Plague’ sound like they were cut straight from Morbid Tales. The black metal undertones lend to the band’s persistent heaviness whilest mixing in a groove; catchy but not poppy. See if some of these tracks don’t get stuck in your head (especially the aforementioned ‘I’d Rather Die’).

Often times the strength of a bands music is knowing when and if they overstay their welcome. Sludge can be known to carry a tune pretty far. Wormwood aren’t one of those bands. Their tracks hover around three or four minutes and they’re fine hitting those notes. Never does anything feel stretched or droning to the point of boredom. It’s actually something you don’t see too often.

Wormwood is a band that is both old school but fresh. Their Celtic Frost influence brings out a groovier sound in an already kick-ass, heavy band. In the current sludge world Wormwood are one of the best bands to watch out for. For an EP this is a crusher. It’s too bad the piece only clocks in around 18-minutes. Still, consider this indoctrination. Wormwood are one of the most promising bands that the sludge genre has to offer. Jump on this EP while you can.