So, here we are; a moment that many thought would never happen. Tonight is the first date on Kerbdog’s first full UK tour in over 20 years, which sees them play in support of their recently released Congregation album , their first in over 17 years. Manchester’s Ritz is packed with a mix of long-time diehard ‘Dog fans, alongside members of the audience who were no doubt still getting to grips with tying their own shoelaces when the band officially called it a day back in 1998. To say that anticipation levels are high across the board would be quite the understatement.

However, the audience is going to have to wait just a little longer before welcoming the returning Irish kings of alternative rock; a wait in no way helped by the fairly lacklustre Nine Black Alps. While the band probably do have the tunes to warrant them being here tonight, it’s unfortunate that their apparent lack of enthusiasm doesn’t do any of said tunes justice. The four men are obviously well-rehearsed and are technically tight, but frontman Sam Forrest’s deadpan attempts at humour and miserable-sounding demeanour do nothing but ensure that the entire band comes across as being stunningly bored.

Whether this is actually the case or not is a completely different matter; for all I can tell, they may well be having the time of their lives up there, but at the very least, they’ll be damned if they are going to let the audience in on this little secret, and delivering an incredibly (albeit possibly unintentionally) sarcastic-sounding ” We are Nine Black Alps and we are glad to be here tonight” certainly doesn’t help their case. A few bursts of energy towards the end of their set provide a glimmer of hope that it’s all an act, but Forrest’s Cobain-esque on-stage nonchalance (hair hanging over face, falling to the floor, even going so far as threatening to smash his guitar), no longer comes across as conveying angst or anarchy, but instead just acts as a reminder that we’ve seen this all performed far more convincingly before.

Amplifier, on the other hand, provide a welcome contrast. Opening with the frenetic ‘Magic Carpet’, Sel Balamir marches dementedly across the stage, practically maniacal at times, with it being almost impossible not to be drawn in by the whole band’s infectious enthusiasm. Hailing from Manchester, and playing here at their old haunt, the band seem hardly able to believe their luck, affirming multiple times how grateful they are to be playing in these particular surroundings tonight.

Whilst not typically the most visually-entertaining or homage-paying of ensembles, tonight Amplifier well and truly dig deep into the big bag of rock and roll clichés; jumping in time with the final cymbal crash à la Angus Young, instigating mass hand clapping… all of which are executed perfectly assuming you can look past their kitschness, which the majority of tonight’s audience seem to have no problem doing. At 45mins, theirs is a perfect set length; more than enough to intrigue, just less than enough to satisfy, and with no danger of being switched off by their dense, multi-faceted prog.

However, there was never any danger of another band outshining Kerbdog tonight. A roaring crowd embraces the unassuming Irishmen as long-lost heroes as they wander slightly sheepishly onto the stage, with the ensuing performance doing very little to disprove that this reception is anything other than well and truly deserved. ‘Pledge’, ‘End of Green’, ‘Mexican Wave’; the band’s opening salvo sends the gathered throng into a frenzy, and by the time the mid-set highlight of ‘On The Turn’ delivers its crushing grooves, audience members are literally flying head-over-heels thanks to a combination of too much liquid bread and The Ritz’s ridiculously bouncy wooden floor. 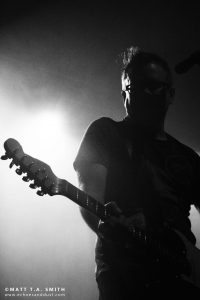 Throughout the set, Cormac Battle delights not only with his deceptively powerful vocals, but with his witty and often off-the-wall stage banter. The combination of being surprisingly comical, respectfully humble, and consistently expressing his gratitude at being able to play in front of such a crowd means that you can’t help but find the chap very likable; a refreshing change in today’s alt. rock scene. Towards the end of the Kerbdog’s set, he extends his thanks to the other bands on the bill, insisting that they must be the real reasons behind attracting the masses that constitute tonight’s Kerbdog audience. Oh, Cormac, how wrong you are.

Accompanied by the strained vocal chords of what sounds like every single person in attendance, the band deliver an anthemic ‘Sally’ to close their initial set, before returning to the stage for a special, rarely-aired performance of ‘Dummy Crusher’ to rapturous applause. Battle sheds his six-string as Dave Draper (producer of Congregation) joins the band on-stage to take over rhythm guitar duties, with the following slightly wobbly rendition of newer song ‘Electricity’ proving to be the only weak link in the setlist, not quite doing justice to the power of the song’s studio counterpart. However, this proves to be a momentary lapse, as Kerbdog more than redeem themselves with an explosive ‘J.J.’s Song’; band and audience alike summoning up one last burst of energy in order to bring to a close a near-perfect performance.