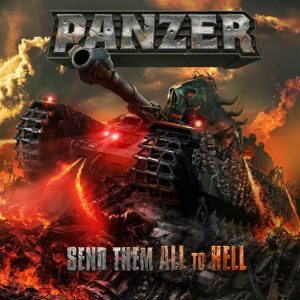 So what do you get when you cross the singer from Destruction with the drummer and one of the guitar players from Accept? You get German Panzer. What is being billed as “classic heavy metal that unites speed, groove, melody and sharp leads to a unique METAL MONSTER!!!?” That quote is straight from the PR that came with the promo. On a side, note that is really all that came from the PR people and it is kind of annoying as a little more specific information, song list, additional musicians etc…would have been nice. But that is on the PR people and not the band so I digress. The important part is obviously the music itself and the overall quality of this Teutonic “Super-Group”. What have these giants of the metal scene produced outside of the comfort of their own bands? Is it worth a listen? Should I spend my hard earned money on German Panzer? Did Schmeir (Destruction), Frank (Accept) and Schwarzmann (Accept) create an album strong enough to rival their own bands? Would it create mass hysteria if dogs and cats lived together?

The answer to most of those questions is yes with the exception of the last two questions which are an easy no and a look it up kids. Send Them All To Hell is a good album. It is fun, it is solid, it has great production and not a note or a second is wasted. In our beloved heavy metal there always seems to be a need for artists to try something new or outside of their comfort zone to prove that they are capable of doing something different. I am not someone who thinks that needs to be the case. I say let the people play and listen to what they want. This is precisely what German Panzer does on this album. Don’t get me wrong, this album is definitely a version of Accept with Schmier singing, but that is ok as well. It is just different enough to be fun, fast, furious and full of the requisite hooks and grooves. It is an album that you turn up really loud when no one else is home and drink beer and bang your head. What it is not is an album that we will be talking about for years to come. Hell, we may not even be talking about it at the end of the week. But that is not to say that this album is not worth your time. It is and if you are a fan of either of these two bands or even just one of them you should give this album a chance.

There is nothing unique about Send Them All To Hell. All of the songs sound somewhat similar, there isn’t a lot of variety to what is being played and the echoes of their main bands is a constant but it is a fun album. Like I said earlier you can easily put this album in and enjoy it from start to finish.  If you are into the heavier side of traditional heavy metal this album will make you very happy and that’s what all of this is about anyway. This is a perfect album for all of us metal heads that want something we can relate to and isn’t some Deafheaven experimental not really metal bullshit. German Panzer is honest to goodness Teutonic metal with a sprinkle of thrash for good measure.

As I have been saying all along if you love traditional metal or Destruction or Accept then go buy this album. You will not find anything unique or genre bending, but what you will find is a solid release from heavy metal veterans that know how to breakout a few good hooks and do it in an expeditious manner.

On a side note: Also included on this album is the cover of Gary Moore’s ‘Murder in the Sky’ from his After the Storm album released back in 1983. On a personal note this is one of my all-time favorite albums and I am stoked that German Panzer decide to cover it and do it in a manner that would have made Gary Moore proud (The former Thin Lizzy guitarist died in 2011). More bands should consider covering some of Moore’s music. Coincidentally and this has nothing to do with this review, but I found it interesting and I am writing the review so now you are stuck reading my thoughts, but if German Panzer wanted to be really unique they would have changed the lyric from Korea to Kuala Lumpur. But I guess that wouldn’t have flowed as well.