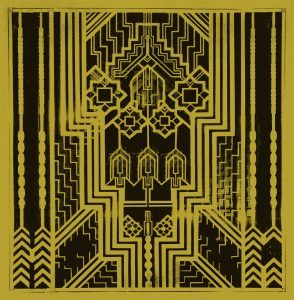 Released on February 9, 2015 via Rocket Recordings

Hey Colossus are a noise rock institution… or at least I thought they were. The opening electronic docile tones to their new offering certainly makes you question that. The vocals kick in, which are light, delicate and you start to wonder what the hell these 6 chaps are up to. In Black And Gold is due out in February on Rocket Recordings, a label known for its trippiness rather than brutal noise rock suggesting Hey Colossus are reinventing themselves, so do they pull it off?

After the soft and teasing launch that is ‘Hold On’ we spring into ‘Sister And Brothers’, which remains fairly stripped back compared to previous material. The old maxed out Hey Colossus we’ve come to know and love is now a thing of the past and you can now dive into every nook and cranny of every instrument. I know Cuckoo Live Life Like Cuckoo was slightly more chilled than anything in the Riot Season days, but this is a much bigger departure, leaving themselves with absolutely nowhere to hide and to do this with complete success the level of song writing needs to be excellent and you know what? It fucking well is, every track feels like it’s had 10 tons of thought put into it, like they have been crafted by people who really know what they are doing.

The entire album also is channelled through some wonderful vibe, like you are drifting down a kraut rock river. That doesn’t mean to say there isn’t the odd waterfall, ‘Hey, Dead Eyes, Up!’ is HEAVY, as the words “DO IT AGAINNNNNNNNNNN” are screamed, you are left helpless other than pump your fist and pull a slightly angry face. You are never far away from a twist or a turn, ‘Eat It’ feels like heavy and sadistic circus music with a bit of rapping. Is he rapping? I think he’s rapping.

The final track ‘Sinking, Feeling’ feels tragic and as we hear about someone “silently slipping beneath the water’s edge” it could even make you cry. It’s hard to imagine Hey Colossus doing this before In Black And Gold and it demonstrates the giant leap they’ve made as a band. Don’t get me wrong, it still has power but it’s channelled in a very specific way, almost like the Butthole Surfers were bollocked by their Mum and told to play nicer. It would have been easy for Hey Colossus to make another maxed out noise rock record, but here is a band wanting to get outside their comfort zone, push every boundary that that they possibly can and they sound all the better for it. Not many bands make their best album over a decade into their existence, but Hey Colossus have done just that.