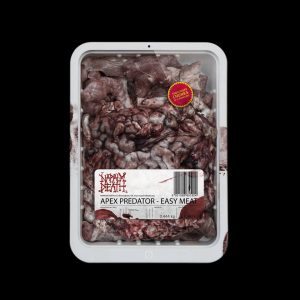 There are some bands that pioneer certain sub-genres and there are bands that inspire others, sometimes, both. But to be honest, in recent years, most of them have withered away into obscurity, if you’re lucky, the not so lucky few now produce horrible, researched, recycled garbage to make money and therefore make a living off of it. As you and I know all to well, when something becomes a job, generally it’s cool and yeah fun, but then it starts to suck the life out of you and then you do what you need to, to get by and make money to survive. Thankfully, Napalm Death is here to save the day.

The grindcore pioneers (yes, I know of Repulsion, but that’s a debate for another time) have managed to do it again, seemingly effortlessly at that. It’s like they never run out of riffs. They keep on producing some of the best riffs around today. I was absolutely blown away by Utilitarian back in 2012 and managed to catch them live a few times in Europe. So 3 years later and it’s that time again. Enter Apex Predator – Easy Meat, their 12th studio album and man oh man is it a ripper. It has some pretty unique nuances, which adds to the over all feel of the record, especially when you spin it for the first time, it kicks off with really cool intro, which just fuels the anticipation.

As mentioned before, it is an endless barrage of riffs, filled with some incredible drumming, but it isn’t a complete blast fest, all the time. This record has a very rhythmic feel to it, very reminiscent of Harmony Corruption, which to date is probably one of my favourite releases of all time by any band. This record has that variety that is really lacking in most of the, dare I say “saturated” extreme music soundscape. Well, sure it’s about how fast you can play, well to most people anyway, but this record just has something to it, something that Napalm Death has had from the very beginning and I just can’t put my finger on it. It is a mystery, but it blows my mind whenever I listen to them. It just comes to show you the coolest riffs are the simplest ones.  The “gang’ vocals in one or two of the tracks was really refreshing, even a small solo, which completely blind sided me. It is just such an amazing list of composition within one record, mind blowing really. Don’t worry; it will still obliterate you from start to finish.

I think a big thing has been that they’ve stuck to their roots and sure, like every band, the sound has evolved over the years, and even after various line-up changes, at its very core, it’s just fucking Napalm Death man. This is embodied in Apex Predator – Easy Meat, which is a phenomenal release. I won’t spoil all it has in store, but I would definitely recommend you get your hands on this as soon as possible.