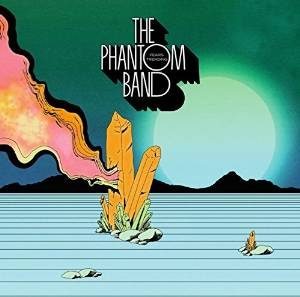 Released on January 26, 2015 via Chemikal Underground

There was a time when bands released albums at least once a year. These days, with lengthy marketing campaigns and even lengthier touring schedules, when a band announces they’ll be bringing a record out eight months after the last it causes a bit of a stir.

To The Phantom Band then, and the release of ‘Fears Trending’, a companion piece to last year’s excellent ‘Strange Friend’. Using similar artwork and fonts on the cover, it’s evident that this is a companion piece, which leaves the question: did the band really produce so much good music in the ‘Strange Friend’ sessions that they felt there was another album in it, or is this a cynical attempt to cash on in sub-standard material?

Oh come on, this is the Phantom Band we’re talking about. The six-piece have previous for this ‘feast after the famine’ approach and so there is much on this release to make it stand in its own right. Compared to ‘Strange Friend’ however, there are times when you can see why certain tracks didn’t make the cut for last year’s release. Nonetheless, it is a bold and ambitious bunch of songs – darker than its predecessor, more focused on percussion and synths and so able to offer something new.

That’s certainly the case on opener ‘Tender Castle’, which was launched ahead of the album and features Scottish folskster Alistair Roberts. If you think the electronics verge on wizardry, wait until the drums kick in. It showcases everything The Phantom Band are good at, essentially building a multitude of layers upon a hugely melodic vocal from the unmistakable Rick Anthony.

The upbeat theme of ‘Strange Friend’, returns on ‘Local Zero’, a twisting, thumping riot of a tune. On ‘Denise Hopper’ we begin with the sound of strings tuning up, military drums and a picked country riff that kicks sand in your face. It grows from there, strong of melody and sound, but ultimately uninspiring and forgettable. The seven and a half minute ‘Kingfisher’ is hugely playful, bluesy and dirty enough in places to evoke Nick Cave. Lyrically, it is dark, with talk of blood moons and being run out of town. “I always left faster than I arrived / so much faster it’s as if I had never come / as if I was always there / long time gone”. With each listen there’s more to pick out.

There’s acoustic (‘Olden Golden’) heavy rock (‘Spectrelegs’) and electronic (across the board, really). Ultimately it feels like a collection of tracks rather than an album. Weird and wonderful in places, it may not match the heights of ‘Strange Friend’, but even by falling short of that marker, it has gold, glittery stars plastered all over it.