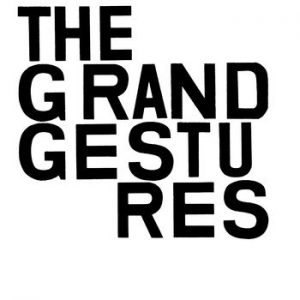 Released on December 19, 2014 via Chute Records

Jan Burnett’s third album under the guise of The Grand Gestures is another journey into a world of electronics, ambience and darkly themed (for the most part) guest vocals. Each Grand Gestures track follows a similar pattern; Burnett (who made his name with Dundee group Spare Snare) invites a vocalist to his home, where he records their vocal track in his bathroom before treating them to a curry. The instrumentation is then added by Burnett.

This third venture has seen the return of familiar guests like Sparrow & The Workshop’s Jill O’Sullivan and comedian Sanjeev Kohli, and introduced a number of new faces including Grahame Skinner and Gary Clark. As if that’s not enough, the first 40 pre orders will be signed by Gary Clark & Jan Burnett and be accompanied with a The Grand Gestures pencil.

Wisely, it is O’Sullivan’s ‘Compus Mentis’ that launches the album – her unmistakable gospel-tinged country voice telling a quick-paced and suitably dark tale (‘Shoot me down a narrow gun, shoot me straight into the sun,’) with a droning bassline and fizzy beeps that immediately capture the listener.

Gary Clark’s ‘The World Will Break Your Heart’ is more minimalist, the pained (and distorted) vocal reminiscent of Konstantin Gropper’s Get Well Soon project.  The contrast with Andrew Mitchell’s ‘In To The Darkness We Go’ shows how diverse the songwriting is on the album, and how the collaborative process can succeed despite of this when there’s a steady captain directing proceedings. The track is the highlight of the album; Mitchell (from The Hazy Janes) delivering a delicate vocal with Burnett’s input again on the minimalist lo-fi side, allowing Mitchell to shine in a dark atmosphere.

The instrumental ‘Listening Station’ may lack the personality of other tracks, but it shows how successful Burnett can be as an electronic musician.

The format changes slightly on the closing track, with comedian and actor Sanjeev Kohli returning for his third album (an ever-present along with O’Sullivan), whose lyrical prose provides some black comedy – it shifts the pace, but as a standalone track it’s another winner, and by closing the album, the shift in tone doesn’t jar the overall mood of the album.

There’s very little to fault – from the more melodic ‘Fear the Night’ from Pauline Alexander to Grahame Skinner’s Moulin Rouge turn in ‘Poster Boy’, there’s something to be picked from each track – individual strength combining to create a record which can proudly stand alongside the venture’s previous two releases – and with the experience of them under his belt, Burnett has created a more cohesive album, even if the names featured on it aren’t as high profile as previous releases.

What started off as a side project has become so much more.