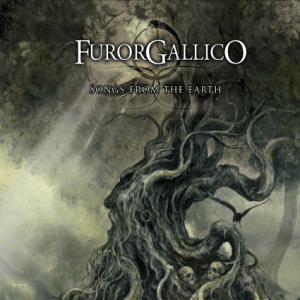 Released on February 16, 2015 via Scarlet Records

Songs From The Earth is the second full length album by Italian folk metal band Furor Gallico. The eight piece band aim to push the boundaries of folk metal to bring it to the modern age. They fuse melodic metal with Celtic sounds using a range of traditional instruments including violin, harp and bouzouki. The lyrics are sung in a mixture of Italian and English which gives the album an exciting contrast.

The first track ‘The Song Of The Earth’ eases us into their sound. I hear rain, then violin, harp and flute playing a neatly-arranged jig, then boom, here comes the metal! Fast drumming and screeching flute. The vocal style is a deep doomy growl leading into a black metal scream. This band knows how to write hooky melodies and choruses, which can be rare in the genre. Through the screeching there are some great harmonies coming like a choir of ancients leading us into battle.

Next up is ‘Nemàin’s Breath’, with a lively marching rhythm it suddenly leads into bagpipes. As we know, the world of bagpipe metal can be a bit hit or miss, what with In Extremo or er, Korn. But this is really done well. The harp playing along with the guitar riff gives a full and rich sound. The middle eight has a nice acoustic breakdown with tenor violin solo and whispering lyrics. This kind of music isn’t really complete without some whispering. The song ends with blast beats and furious bagpipe playing.

‘Wild Jig of Beltaine’ is a fists in the air flute-led metal tune. Again the harp adds a lot to the sound. With its screaming and clean gang vocals, it’s a strangely uplifting song. ‘La Notte Dei Cento Fuochi’, the first Italian track of the album is blistering folk metal with a hooky chorus, keeping up the standard of the previous songs. Complete with epic bagpipes and chanting vocals.

Now for some change; ‘Diluvio’ is an epic folk rock ballad. Breathy clean vocals and pop hooks show the band’s sensitive side. This is the closest they may get to a pop hit but sadly the album loses the momentum of the brilliantly written folk metal beforehand. However if you enjoy a Brian May on top of a mountain guitar solo, you can find it here.

Wait a second, next we hear some jazz bass. Are we listening to a folk metal Os Mutantes?! This is the intro to ‘Squass’, a song sung with a clean shouting vocal. It’s a dancy fiddle-led folk metal tune with added punk rock and a middle eight of a violin jig moving into a bluesy guitar solo.

Next up in this album’s unexpected eclectic mix is ‘Steam Over The Mountain’. Starting off with a massive Deftones-style riff we’ve headed back to the metal. Screaming follows with some nice discordant sounds that lead us back into the aggression with groove.

‘To The End’ is a classic folk metal number, but it has its extremes. The verses have the brutal black metal aggression but the folk style is very traditional with its violin riffs. The chorus has a female vocal sung in quite a sweet way: “listen to the scream inside, this is the voice of the earth”. The pagan elements of the band are still very strong.

‘Eremita’ is the last track on the album. It has a soaring intro with swirling electric guitar and epic violin harmonies. The chorus is a sing-along, a great track to end an album. However we get more: the song drops out to piano and harp with a modern pop drum sound which quickly leads to crazy distorted heavy guitars with random folk instrument arrangements. The madness is over.

Songs Of The Earth contains some seriously slickly-played and well-written folk metal tracks and a pop sensibility, which is generally used to great effect, however it can go a little too far on occasion. Overall though, this is a very enjoyable album.