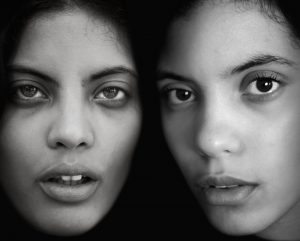 Released on February 16, 2015 via XL Recordings

Ibeyi are a French-Cuban duo made up of twin sisters; daughters of famed Buena Vista Social Club percussionist Anga Díaz. Despite being raised in cosmopolitan Paris, Naomi and Lisa-Kainde have maintained a strong connection to their African and Cuban heritage.

This exposure to both modern and traditional cultures has provided the twins with an eclectic range of influences. Their much-anticipated debut album fuses the cool, minimalist production of James Blake with gospel-inspired vocal harmonies, Afro-Cuban rhythms, and additional flourishes from jazz, soul, and hip-hop. It’s an intoxicating mix.

Naomi and Lisa-Kainde’s Yorùbá ancestry is the keystone of their musical identity. Originally from southwestern Nigeria, the Yorùbá people travelled across to Cuba with the slave trade in the 1700s. Their influence looms large in Afro-Cuban music.

The girls often break into the Yorùbá tongue mid-song, while Naomi plays West African rhythms on the cajón or Batá drum, bringing the songs that their mother sung to them as children into an exhilarating new context. Moments like these, such as the end of the single ‘River’, are my favourite on the album.

Ibeyi self-describe their style as “contemporary negro spirituals.” The label makes sense; despite the sparse, modern production of XL Recordings’ Richard Russell, Ibeyi’s music overflows with warmth, soul and sincerity. Their songs show a remarkable depth of feeling for musicians so young, with lyrics gravitating around themes of love, loss, salvation and healing.

While this album is not without its flaws, for a debut it certainly catches the ear. For Ibeyi to have produced such a unique fusion of styles at little more than twenty years of age is impressive. I can’t wait to see where their music grows from here.